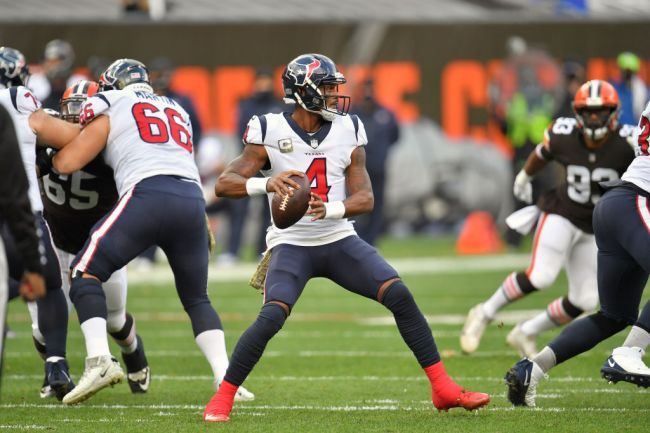 Some Browns fans are not happy with the team’s big move.

On Friday, the Cleveland Browns traded for Deshaun Watson and gave him a massive $230 million fully guaranteed contract.

Deshaun Watson gets a fully guaranteed 5 year $230M contract. That is $80M more than the previous record for fully guaranteed money at signing ($150M). This deal was negotiated by David Mulugheta of Athletes First. https://t.co/nQls9WRpD1

The base salary for Watson’s contract in the first year will be only $1 million due to the fact that the team expects him to get suspended while the NFL investigates the 22 sexual misconduct lawsuits filed against him.

More details: Deshaun Watson gets a $45 million signing bonus. His base salary this season is $1 million, so any suspension — if there is one — would cost him juts $55,555 per game lost. https://t.co/6gDhRXksBq

Not surprising Deshaun Watson's agents foresaw the risk of a suspension in negotiating his new contract but to see it this way is telling: If Watson is suspended, his base salary in 2022 would be lost, but his base is "only" $1 million in contrast to $45 million in signing bonus. https://t.co/HYAyA6blw0

Some lifelong Browns fans say they are going to quit rooting for the team because they can’t get behind Watson being the team’s QB.

Jokes aside. I’m legitimately devastated by this. Crushed. Too much of my identity was tied up in the Browns. I want no part of Watson situation. I’m out and the whole thing made my body sink. I’m stunned and hurt. This is a bad decision the Browns made. Made numb by it. Sucks

Welp, @Browns I'm not rooting for Deshaun Watson… which means I need to find a new team to root for! I'm feeling maybe the #billsmafia

…Buffalo gets lake effect snow, they have that chip on their shoulder grit I admire, & I rooted for them in the playoffs. Should I join?🤷‍♀️

I enjoyed rooting for Browns as an Ohio Native even though they are not my favorite team. That ends with the Watson trade. I coach young girls and I cannot justify under any circumstance cheering for them with him as QB.

I was raised a @Browns fan. I am now 40 years old & refuse to root for my hometown team.
•
Shame on you. Shame on the @nfl. You should not have to compromise morals to win.

So I guess I’m rooting against the Browns now.

And just $1 million next year in case the NFL suspends Watson.

These are not priorities I respect.