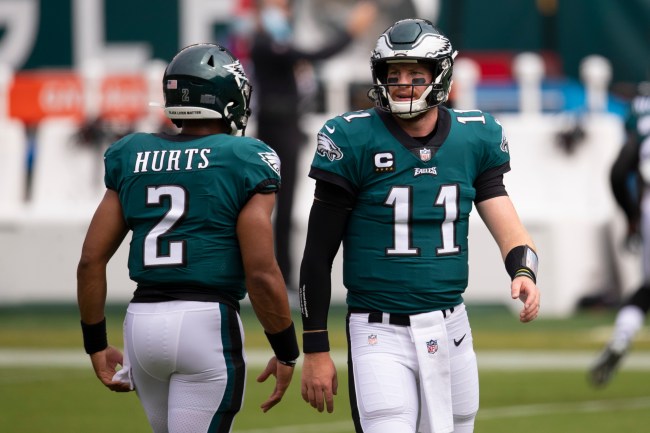 The Eagles are 3-6-1 after losing consecutive games to the Giants and Browns. Philadelphia is struggling and is set to host a high-powered Seattle team on Sunday with quarterback Carson Wentz at the helm. Wentz has completed less than 60 percent of his passes for as many touchdowns as interceptions. Fans have not been happy with his performance and called for him to be replaced by first-year quarterback Jalen Hurts.

Hurts was drafted in the second round of the 2020 NFL Draft in April. The 22-year-old from Houston began his four years of eligibility at Alabama and lost in the College Football Playoff semifinal as a freshman, but won a National Championship as a sophomore. He was replaced by Tua Tagovailoa in the second half of the National Championship game and played as a rotational backup after Tagovailoa was named the starter in 2018. Hurts transferred to play for Oklahoma for his final year on the FBS level and finished second in Heisman Trophy voting.

Eagles head coach has not indicated that Hurts has any opportunity to earn the starting job, but he has used the duel-threat signal-caller in positional packages throughout the season. Wentz appears to be the guy to face the Seahawks this weekend and their opponent’s top receiver D.K. Metcalf has a few thoughts.

ESPN’s Jordan Shultz posted a poll on Instagram asking whether Wentz or Hurts should be the starter moving forward and both fans and players responded, including the prominent Seattle star. 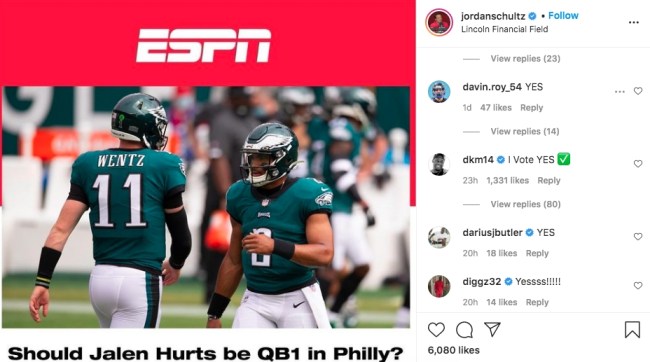 Metcalf, who was passed on by Philadelphia in the 2019 NFL Draft in favor of J.J. Acega-Whiteside responded in favor of his former SEC opponent to get the nod. As did James Ihedigbo and Darius Butler.