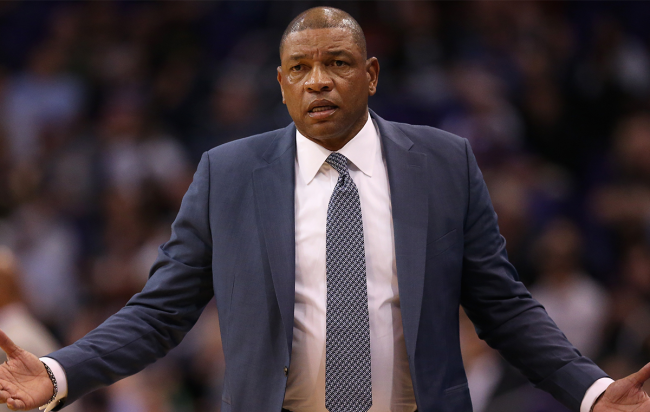 Virtually everyone has seen their usual work routine impacted by the pandemic, as most people who probably could’ve been working from home prior to its arrival have been able to take the virtual approach.

If you’re one of them, you likely know working remotely can be a gift and a curse. As nice as it is to not have to deal with a commute or bother with pesky things like “putting on real clothes” and “personal hygiene,” it can be easy to get a little too comfortable when you can get away with exerting as little effort as possible when it comes to completing your various tasks, a fate that befell one reporter who talked with Doc Rivers over Zoom on Wednesday night.

I’ve personally found Zoom meetings to be extremely beneficial when it comes to forcing myself to present myself as a Real Adult at least a couple of times per week. Do I necessarily enjoy having to shave and pick out a nice shirt that decidedly clashes with the sweatpants I’m rocking underneath my desk? No, but it’s good to have something to keep me in check.

One of the nice parts of video calls is that you can always turn to the trusty “technical difficulties” excuse if you’re not able to put in the work required to look somewhat presentable, and while no one will actually believe your camera isn’t working, it’s better than getting put on blast in front of your coworkers—or, in the case of Jackson Frank, the entire world.

After coming away with a 119-113 victory over the Rockets, Doc Rivers sat down to field questions from reporters working remotely from various locations, including the bed Frank apparently decided to post up before hitting the 76ers coach with a question about his team’s performance.

While Rivers obviously didn’t take too much offense to his choice of location, he couldn’t stop himself from blowing up Frank’s spot and hit him with a “Jesus Christ, Jackson” when Frank confirmed that the coach’s eyes were not deceiving him.

Frank attempted to come to his own defense after the clip started making the rounds, claiming he was forced to work from bed because he didn’t have a desk to work at while staying at his parent’s house, which still doesn’t really address why he thought that was the best fallback.

Doc shaming me for not having a work desk at my parents’ house, a place I do not live!!! https://t.co/kGOS57Ql7l

With that said, I’m currently sitting in bed while writing this, so I can’t really say I blame him.