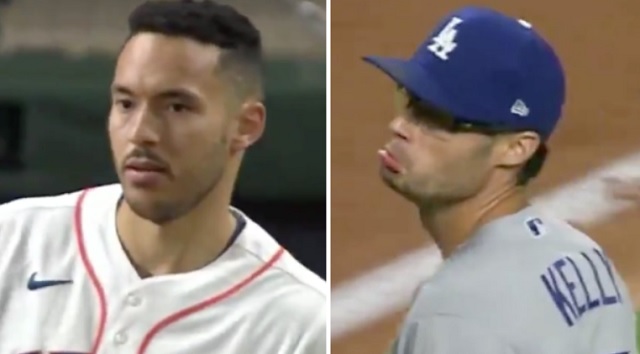 Things got heated between the Dodgers pitcher Joe Kelly and Astros Carlos Correa on Tuesday night.

Kelly, who was on the Boston Red Sox team that got beat by the “cheating” Astros team in the 2017 Division Series, got things going in the sixth inning when he threw a 96-mph fastball over the head of Alex Bregman, then a curveball over the head of Carlos Correa a few batters later.

And there we have it

THIS IS GETTING WILD pic.twitter.com/Kd4zgjKzBj

Kelly would go on taunt Correa after striking him out by yelling ‘ you gotta cheat to hit” followed by several other expletives which led to the benches clearing.

THINGS ARE POPPING OFF IN HOUSTON pic.twitter.com/eLuViD1HMz

Joe Kelly said “you gotta cheat to hit” as he mocked Correa after striking him out. I love baseball

According to Astros manager Dusty Baker, Kelly yelled ‘nice swing, bitch” after the strikeout which set off Correa.

Dusty Baker on #Dodgers reliever Joe Kelly: "What really enraged everybody was what he told Carlos [Correa] when he struck him out, "Nice swing bitch!''

After the game, Kelly said that he didn’t throw at the Astros players’ heads on purpose when asked about the incident.

Joe Kelly said he did not throw at the Astros on purpose. "My accuracy isn’t the best,” he said, referencing the window he broke at his home.

Update: Kelly has been suspended for eight games by the MLB for his actions on Tuesday night.