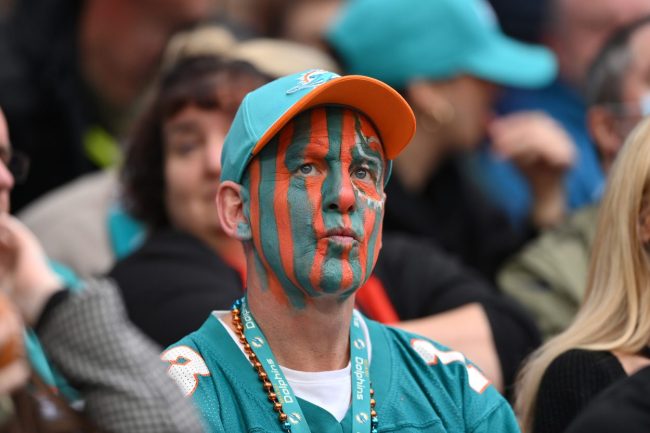 Getting engaged at a sporting event is either a big hit or a big miss. For one Dolphins fan on Sunday, it was the latter.

The afternoon started with Miami falling behind 17-10 to the New York Jets at halftime. Surely, in an effort to beat the lines at either the bathroom, the concessions or the beer line, a male Dolphins fan decided to leave his seat.

There was only one problem— he was about to propose.

When the clock hit zero in the second quarter, the game went to halftime. Obviously.

However, the fan had not returned to his seat. His girlfriend was sitting all by herself when, all of a sudden, a very big life moment started to unfold.

In a gesture that was arranged beforehand, a message popped up on the big screen with a photo of the fan and his girlfriend.

“CHRISTINE, WILL YOU MARRY ME?”

It was one of the biggest moments of their lives and it did not go as planned.

As is standard, after displaying the message, the jumbotron turned to a live shot of where the lovely couple was supposed to be sitting. But only Christine was there. All by herself.

Her boyfriend, who might have been her fiancé by the time the camera cut to their section, had not made it back to his seat. He missed his own proposal.

So they just did a scoreboard proposal here at Hard Rock. However, when they cut away from this graphic to where the two are supposed to be sitting, the guy wasn’t there!

Just the girl, sitting there, hand over mouth!

Dude must have been in the concession line lol pic.twitter.com/Jy1FkN4Tkf

It is unclear as to whether Christine said yes. It is also unclear whether her boyfriend made it back to his seat.

Christine’s boyfriend knew this was coming. How did he miss it?!

He had to arrange the proposal with the team. He had to tell them where he was sitting and he knew when it was happening. Halftime doesn’t change, it’s always between the second and third quarters.

Maybe he got cold feet and ran? Maybe he had a bad hot dog and needed an extra moment in the bathroom?

Whatever the reason, Christine’s boyfriend messed up big time. That’s really tough for him and for her. Imagine how she felt in that moment. YIKES.