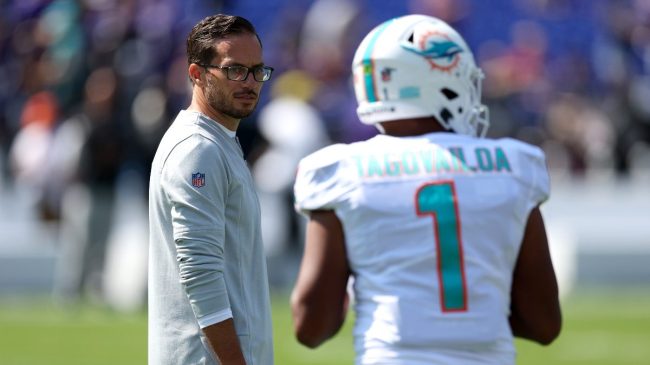 Tua Tagovailoa is nearing his return from injury after suffering a scary concussion in Week 4. Since then, many have been concerned for the young quarterback’s health, however, he seems ready to get back under center as soon as possible. Head coach Mike McDaniel expresses his excitement for Tagovailoa to return with the injury concerns still looming.

According to the Miami Herald, Tagovailoa is set to have his first full practice on Wednesday. As of right now, the young quarterback is being treated as the starter for Week 7. Dolphins head coach Mike McDaniel explains how excited he and the team is to have him back. “Last week was a big week to get through the protocols and specialists and get him back moving around. He responded real well. We’ll be excited to see him practice on Wednesday. He’s a very good player at that position.”

It’s been a minute since we’ve seen Tua Tagovailoa on the field. So there are some concerns he could have a rocky time back under center. Especially considering he’s recovering from one the scariest concussion injuries we’ve seen. Even so, Mike McDaniel isn’t expecting much rust on the third-year quarterback, per the Miami Herald.

“I don’t anticipate rust from a mechanics standpoint. He’s the same guy. He didn’t start throwing right-handed. Getting used to the whole process, there’s a little rust in that.”

We’ll see how it all plays out. Although there are some injury concerns for Tua Tagovailao, the Dolphins are hopeful he can return to the lineup. The team was 3-0 in the first three weeks when he was starting but has gone 0-3 since. For that reason, it’s no wonder McDaniel is elated to see Tagovailoa back in the huddle.