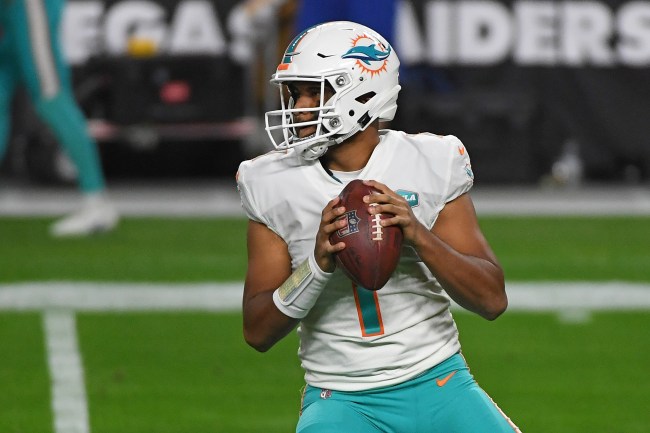 Dolphins’ Tua Tagovailoa has found himself in the middle of trade rumors for Deshaun Watson after a subpar rookie season.

For the past few weeks, rumors about the disgruntled Texans QB being interested in getting traded to Miami have circulated on various media outlets.

Sources say Watson could play hardball with Texans about a trade. His new $156 million contract includes a no-trade clause but informed speculation from a source is that he would consider the @MiamiDolphins in which Tua Tagovailoa and additional compensation goes to Houston.

On Monday, Tua went on the Dan Patrick show and things got a bit awkward when Patrick brought up the Watson trade rumors during the show.

.@dpshow: "I was gonna buy a Tua #Dolphins jersey in the offseason. I just want to make sure you're still gonna be there. Should I wait til August?"

"That's something that I can't control. I don't have any control over those trade deals and what not." –@Tua on his name being involved in trade talks surrounding Deshaun Watson. #Dolphins #Texans pic.twitter.com/yJ4k4RbfOG

At the end of the season Dolphins GM Chris Grier made it clear that the team was committed to Tua next season.

Tua, we’re very happy with. He’s our starting quarterback. He did a nice job this year coming in as a rookie with no offseason and the challenge in dealing with all that. Very happy with him and looking forward to watching him progress here over a [full] offseason going into next year. For us, not really talking about draft strategy, anything right now.”

Tua and Grier are going to have to answer a lot of awkward questions this offseason until Watson gets traded.