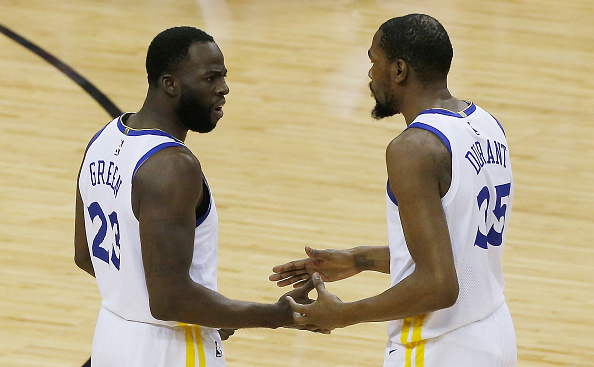 We have more fallout from the Draymond Green-Kevin Durant Warriors drama.

At the end of regulation of last night’s Clippers-Warriors game Green decided to run up the court with the ball in the final seconds of a tie game instead of passing it to Durant who was asking for the ball.

Durant and Green proceeded to yell at each other on the bench after the play.

During the argument, Green reportedly called Durant “a bitch” according to a report from Yahoo’s Chris B. Haynes.

Here’s the video where it appears that Draymond called Durant a bitch while talking to Boogie Cousins.

Interesting sequence here after Draymond’s play at the end of regulation:

-Durant is pissed saying, “come on man… I’m trying to win a basketball game” with Iguodala talking him down. pic.twitter.com/iqLuxI6SdJ

Apparently the Warriors saw the video and have suspended Draymond for one game.

After the Golden State Warriors reviewed comments made in heated moments last night, Green is expected to sit tonight against the Atlanta Hawks to cool off. https://t.co/SadxTuy0ep

The Draymond Green one game team suspension will cost the forward $120,480. This is a team issued suspension and the Warriors will not receive a luxury tax credit.