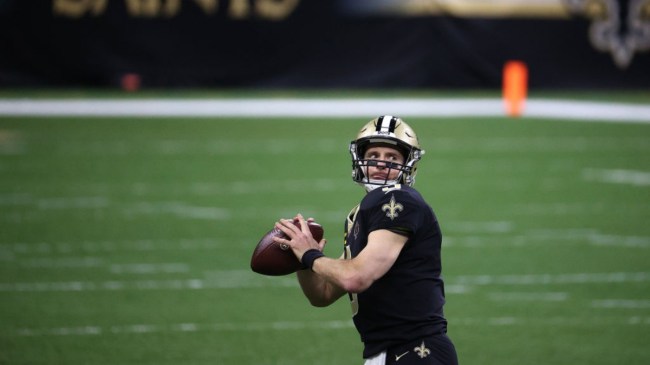 Drew Brees had a long and productive career in the NFL.

He spent the later stages of his career battling Tom Brady for a number of career records in the league, but wasn’t quite able to last as long in the league as Brady, leading to Brady winning those battles. Despite being surpassed by Brady, Brees still finds himself near the top of quite a few lists in NFL history.

It turns out, there’s only one reason that we aren’t still seeing Brees and Brady battle it out for supremacy in the NFL quarterback record books. That one reason is the shoulder injury that Brees suffered back in 2005. Brees says if it weren’t for that injury, he’d also be playing until he’s 45 years old.

"If my arm wasn't put together with 13 anchors, I'd play until I was 45. Here’s Tom doing it because it takes a lot of commitment & sacrifice and not everybody could do it." https://t.co/ynHYMlY6Mm

That shoulder injury has had a major impact on the history of football at multiple levels. There’s the obvious prevention of Brees continuing to chase records. However, it may have had an even bigger impact on football history back in 2006.

Brees couldn’t come to an agreement on a contract extension with the San Diego Chargers after the 2005 season, leading him to test free agency. In free agency, he was pursued by the New Orleans Saints and Miami Dolphins. At the time, that Dolphins team was coached by Nick Saban.

The shoulder injury led a doctor to advise the Dolphins not to sign Brees. He instead went to the Saints where he went on to eventually win a Super Bowl. Saban resigned as coach of the Dolphins after the 2006 season, heading to Alabama where he’d build college football’s most dominant program.

It’s incredible to think how much of an impact this Brees shoulder injury has had on NFL history even up to the 2022 season.