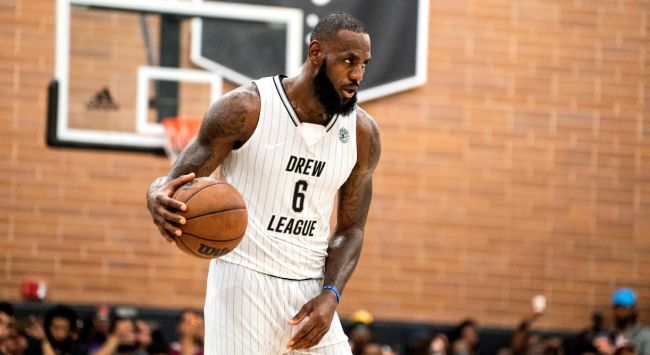 Basketball fan were given a special treat over the weekend when LeBron James and DeMar DeRozan showed up to play in a Drew League game on Saturday.

King James did not disappoint either, dropping 42 points and grabbing 16 boards in a nail-biting 104-102 win for the MMV Cheaters over Black Pearl Elite.

Considering Black Pearl Elite did not have the benefit of any current NBA talent on their squad it was a pretty good showing..

During the game, James showed on numerous occasions why he is in the conversation for NBA GOAT. In fact, at one point during the day, basketball fans on social media made one of the players who guarded him, Dion Wright, the subject of numerous jokes and memes.

Bron really had this man fighting for his life 😭 @brhoops pic.twitter.com/xEeInDNEh9

The 6-foot-7 Wright, who played his college ball at St. Bonaventure and put up some nice numbers in his senior season scoring 16.7 points and grabbing 9.1 rebounds per game in 2015-16, saw all the jokes on social media. So he responded with a message directed back to the jokesters.

“He dropped 40 I had 20 for every 2 points he had I had 1,” Wright tweeted. “That’s really a once in a lifetime player we had no nba guys they had 2 and only loss by 2 points if bron doesn’t show up we win for sure.”

He’s not completely wrong, and he certainly will have a memory that very few other basketball players will have. However, his response still didn’t stop the haters from hating.

The difference is he gave you 40+ having fun, sure you gave him 20 but you was out there fighting for your life salute to you though🫡🔥

Some fans after reading Wright’s response to all the jokes, did give him some of the props he was seeking.

The dude is probably a solid basketball player who wanted to get some reps in... Little did he know, he'd have to guard the best player of all time.

I doubt any of us would look LESS scared/intimidated lol

@TheWrightHoops it may seem like we are clowning you. But best believe everyone would trade places with you on that court. No one expected yall to do anything besides get cooked individually by the face of basketball…. As a team y’all did excellent

“This is a once-in-a-lifetime opportunity, and I made the most of it tonight,” Wright told the Orange County Register after the game. “When I lay my head on my pillow, I can know that I gave it my all.”

Wright told me he made last minute plans to fly from Buffalo, NY, to LA just to play against LeBron. He wound up with 20 points. “When I lay my head on my pillow, I can know that I gave it my all.” pic.twitter.com/7TFpRZCEbC