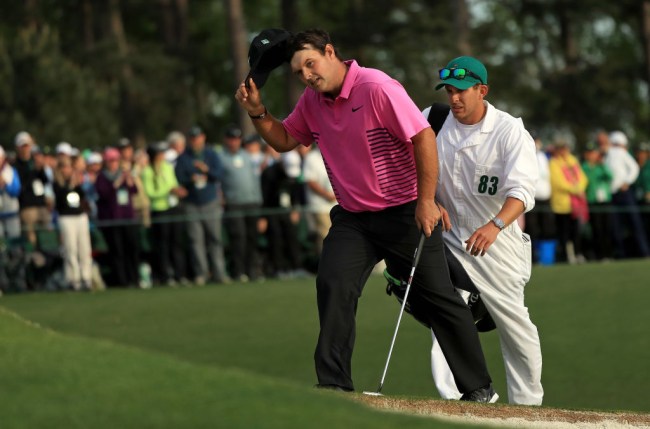 The 2018 Masters provided some serious drama on Sunday afternoon as Jordan Spieth and Rickie Fowler put the pressure on Patrick Reed. As I’m sure you know, Patrick Reed held on to win the Green Jacket and cemented his name in the annals of golf history with a -15 finish that was good for a $1,980,000 payday.

For weekend warriors like myself who never have a shot at hell in playing the Augusta National course a lot of us get extra thrills by betting on The Masters. The biggest non-Vegas action of the weekend was in the DraftKings Masters Millionaire Maker. One man took home this year’s million dollar prize and it capped off the best weekend of his life.

RotoGrinders member Drew Mathews, username redkacheek, didn’t even know he’d won until he checked his winnings on Sunday night because he got married on Friday in Nashville. He’s a millionaire now, two days after getting married, but because of his wedding on Friday, he was forced to set his DraftKings Masters Millionaire Maker lineups last Monday. He had an idea things were going well when he started getting a lot of new followers on DraftKings and Twitter but he was afraid to check his lineups and jinx it. Here’s how it all went down, via his interview with RotoGrinders:

RotoGrinders: When did you realize you had a shot at the million. What were your thoughts after the Charley Hoffman hole-in-one on 16?

Drew Mathews: So this is going to be a real buzz-kill (as it kinda was for me)… I was in the car all day driving back from Nashville for my wedding which took place on Friday evening. I had 2 lineups doing okay going into Saturday and was hoping for a push, but really did not pay much attention. And keep in mind, I am an ex-professional golfer, played in college etc. So I love the Masters, and absolutely love watching it. But this week being my wedding, I had to put my lineups in on Monday and Tuesday and then focus my attention elsewhere. So the really surreal part when I had the gut-feeling I may be near the top was when I was getting notifications of all these people adding me as friends on DK and following me on Twitter. So I just had this odd feeling something was happening. Then Dan Back tweeted me “Congrats on the Milly.” So I was thinking, no way this is happening and I didn’t check DK because I just didnt want to see the reality of anything less than $1M. So when I got home I got the winnings notification from DK and I showed my wife and we’re just so excited. Just a completely surreal dream experience. I didn’t even get to watch the ace. My buddy called me later and that’s when I went back through Hoffman’s scorecard and saw the Hole-in-one on 16. Just a really odd week for me but kind of made it more special. (via)

Congrats to Drew Matthews on becoming a millionaire on the same weekend he got married. One hell of a weekend right there. The entire interview over on RotoGrinders is pretty spectacular if you’re into daily fantasy sports and you can read it in full here.