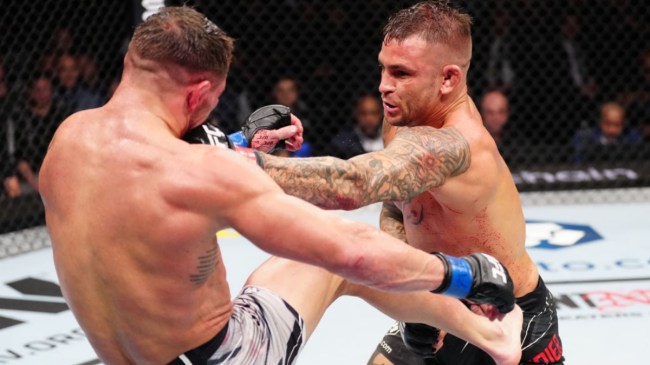 Round 1 saw the two fighters spend most of the round trading on the feet in a back and forth battle. In Round 2, Chandler got the upper hand with his wrestling and dominated the round to even things up heading into Round 3.

With the fight on the line, Poirier appears to be the fresher fighter in the final round and took advantage of it. Turning Chandler’s takedown attempts against him, eventually ending up on top and taking Chandler’s back. From there, Poirier slapped on a rear-naked choke to get the finish with 3 minutes left in the fight.

The fight won the evening’s Fight of the Night bonus, but it wasn’t without some controversy. Some fight fans were less than impressed with Chandler’s conduct during the fight.

While he was donating Round 2 from top position, Chandler repeatedly landed blows to the back of Poirier’s head, requiring more than one warning from the referee. He also appeared to intentionally blow blood onto Poirier’s face while working from top position.

Still, the biggest infraction he committed during the fight came when he fishhooked Poirier.

Today, Poirier discussed the incident with Ariel Helwani on The MMA Hour and revealed that he responded by biting Chandler when his hand went in The Diamond’s mouth.

Dustin says he bit the shit out of Chandler’s finger when Chandler put in the fishhook 😂😂😂😂 pic.twitter.com/yl2KIyV5NB

Luckily, the fishhook didn’t have much of an impact on the fight, perhaps because of Poirier’s expert defense against the maneuver, and the UFC avoided controversy after last week’s strange Darrick Minner fight.

Whatever it took for these two men to put together such a classic, fans will be clamoring to see what they have in store the next time each man steps into the cage.