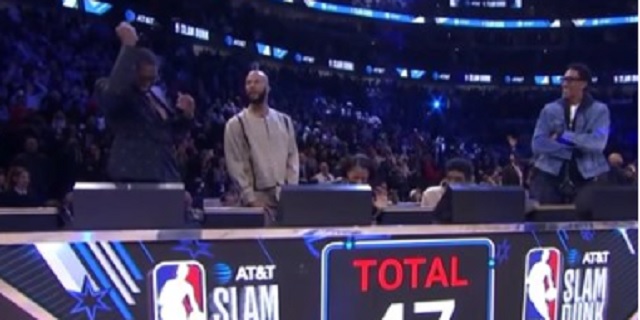 Despite the fact that Gordon was able to dunk over Tacko Fall in his final dunk he was only given a score of 47 which was one short of Jones Jr.

According to dunk contest judge “Common” the judges had agreed to even up the tally of 48 to have the contest go to a judges choice but one of the judges went rogue.

Just spoke to dunk contest judge @common who tells @ESPN, “We thought it was going to be tied. We were like, ‘This is a tie’ …But somebody didn’t do it right. I don’t know who it is.” 👀👀👀

If the dunk contest was tied after that last dunk, the judges could have gone to a judges choice. Essentially, each would hold up a card with who was the best dunker all night. That’s what @common says he thought was the best outcome because “They were both so good.”

Just by looking at the reactions from the judges after the final score was shown you could tell it was Dwyane Wade who rigged the contest for his Miami Heat brethren.

It was at this moment, @common and Scottie Pippen knew, Dwyane Wade fucked up. #nbadunkcontest2020 #AaronGordon pic.twitter.com/vloB3o94NT

In the end it doesn’t really matter who won because Saturday night’s dunk contest will always be remembered as one of the greatest dunk contests of all-time.

Here's every dunk in the epic final round between Derrick Jones Jr and Aaron Gordon #nbadunkcontest pic.twitter.com/vCrphbnc39