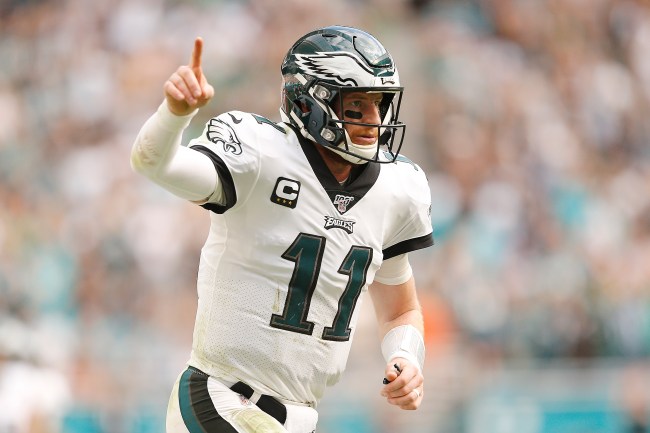 The Carson Wentz trade rumors are starting to heat up.

On Thursday, NFL insiders Ian Rapoport and Mike Garofolo reported that teams are beginning to call the Eagles about a potential trade.

The #Eagles are getting trade calls centered around QB Carson Wentz. And while Philly doesn’t plan to deal him, they haven’t hung up the phone, either.

My story with @MikeGarafolo: https://t.co/gxyA0Rd8qT

With Matthew Stafford off the trade block and headed to the Rams, the eyes of QB-hungry general managers have turned to another QB who could be available: Carson Wentz.

Sources say that teams have begun calling the Eagles on their former starter Wentz, plotting a roadmap for a potential trade as teams get closer to the start of the league year.

The Eagles are not in a hurry to trade Wentz — and in fact as of now intend for him to return for 2021 under new coach Nick Sirianni — but they did field the calls and discussed the issue. GM Howie Roseman will almost always listen, and this is no different.

ESPN’s Adam Schefter went on to report that Wentz wants out of Philadelphia which is a major component of why the Eagles are listening to trades for him.

SCHEFTER: And wants to leave the franchise. Okay? And that’s why the trade still is in play. And, again, people wondering where did this stuff come from at the end of the year. Was it made [up]? This is all real. None of this is made up. And just because he would like to be moved or hasn’t commented doesn’t mean he will be. If I had to guess, I would guess he is traded. That would be my guess. At some point this offseason. But, again, they’re not looking to get rid of him. They’re not.

According to Philadelphia Inquirer’s Lew Bowen, an NFL source told him that a Wentz trade is “close” to happening.

I've talked to an NFL source, not w/the Eagles, who hears a Wentz trade is close. That isn't first-hand information. I do feel that the longer we go without Wentz saying something like "I'm happy to be an Eagle and excited about playing for Nick Sirianni," the closer we get…

As of now the only team publicly linked in trade talks for Wentz are the Indianapolis Colts but there are probably three or four other teams including the Panthers, Bears, Patriots and Saints who be interested in trading for the disgruntled QB.