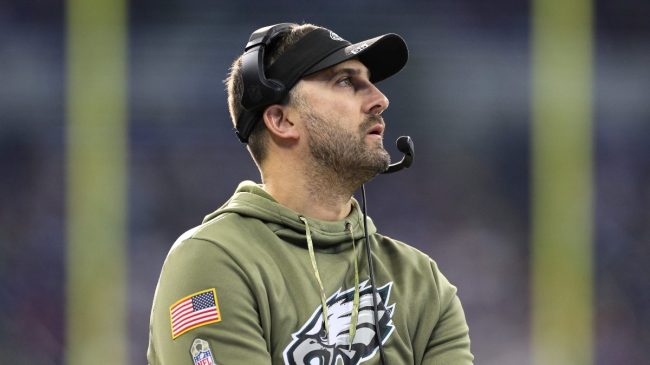 The Philadelphia Eagles squeaked by the Indianapolis Colts in Week 11. It was a big win, as the team was able to bounce back from a loss. However, the fanbase isn’t sure how to feel right now, as apparently, Nick Sirianni dedicated the win to former Colts coach Frank Reich.

According to Dov Kleiman, right after the Eagles secured the win, Sirianni ran to the stands and yelled, “that shit was for Frank Reich.” At the time, fans clapped and applauded. However, now that the video surfaced, Philly fans aren’t sure how to take it.

Of course, Nick Sirianni named Reich as one of his top three mentors for his career. So it makes sense why he felt so emotional defeating the Colts after they fired their former head coach. Even so, Eagles fans can’t seem to agree on how to react to Sirianni’s emotions.

In the end, this could just be a dig at Jeff Saturday.

Fair but ALOT of coaches don’t like the Saturday hire

Some Eagles fans are losing hope for the playoffs.

Even as a Philly fan, I’m not that confident for the playoffs. Two bad weeks in a row and the offense has yet to play a full dominant game. That said, somehow they keep winning!

Haters are all over the place these days.

Guy rocks for his former boss still. Why do people look for any reason to hate on him!

At the end of the day, the Eagles are in first place in the NFC and still look like Super Bowl contenders. Meanwhile, the Colts moved on from Frank Reich and hired Jeff Saturday as the new head coach. We’ll see how it plays out for both franchises.

Even so, there is no question that Nick Sirianni felt some sort of way with how Reich’s tenure ended in Indianapolis.