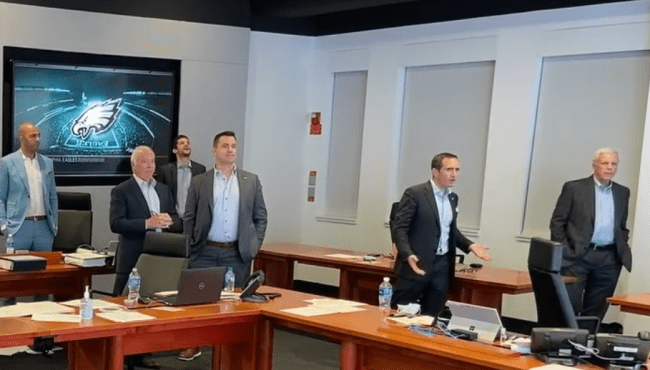 Things appeared to get a bit awkward in the Eagles war room on night two of the NFL draft.

With the 73rd pick in the draft, the Eagles selected Louisiana Tech defensive tackle Milton Williams.

With the 73rd pick in the 2021 #NFLDraft, the Eagles select DT Milton Williams.@DietzandWatson | #EaglesDraft pic.twitter.com/1CDEZFKpbr

As Eagles GM Howie Roseman congratulated everyone in the team’s war room after the pick he was met with a visibly upset senior scout Tom Donahoe.

That last dude is NOT happy pic.twitter.com/rPSmYFMs7S

Roseman confirmed to the media that Donahoe was upset because he wanted the team to pick another player.

Howie Roseman on the video of Tom Donahoe's reaction after the #Eagles took Milton Williams: "These guys spend all year scouting these guys and you get favorites, guys you feel strongly about, we all do. That's the fun part of being in the draft room, the emotions of it."