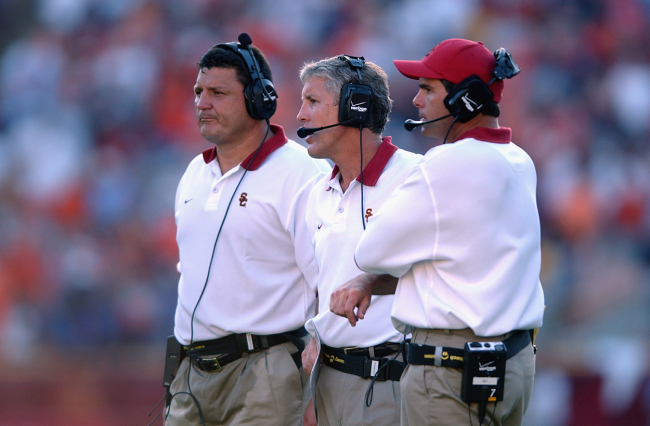 Win, lose or otherwise, Ed Orgeron is one of the best recruiters in college football. The 60-year-old has made quite a few stops throughout his career, but everywhere he has gone, big-time commits have followed.

Orgeron started his first stint with the Trojans in 1998 under Paul Hackett. However, when Hackett was fired in 2000, Orgeron continued to recruit for USC without a head coach, even though his future with the program was unclear.

Two weeks later, Orgeron was recruiting former five-star defensive lineman Shaun Cody. Cody’s mom looked Cody in the eyes and told him that her son would not be playing for USC because the Trojans did not have a head coach and they were not sure if Orgeron even had a job.

Not long thereafter, Coach O ran into Pete Carroll, who was soon to be named as Hackett’s replacement. Carroll asked Orgeron what he was doing, and Orgeron told him that he was recruiting for the Trojans, and quickly divulged how much he knew about the area and the relationships he had built with players like Cody and their families.

A few days later, when Carroll was officially announced as USC’s head coach, he said that he was cleaning house and starting fresh— except for Orgeron. Coach O was the only coach who got to stay on and eventually landed a commitment from Cody.

The full story of how Orgeron was hired by Carroll at USC is even better when he tells it.

All of this goes to say that Coach O is an incredible recruiter.

After being retained at USC, he was named the team’s recruiting coordinator. After winning a national championship in 2003, Orgeron and Carroll targeted the nation’s top recruit— five-star running back Adrian Peterson.

Ultimately, Peterson’s recruitment came down to USC and Oklahoma. Although he eventually committed to play for the Sooners, Orgeron, Carroll and the Trojans did everything that they could.

When Orgeron went to visit Peterson in high school, he asked him what it would take to get him to flip from OU to USC. Peterson said that Bob Stoops, the head coach of the Sooners at the time, had gone and visited his father in prison — so Carroll and Orgeron also tried to meet with Peterson’s father, but were ultimately unable to do so.

Hear Orgeron tell the full story in his own words: