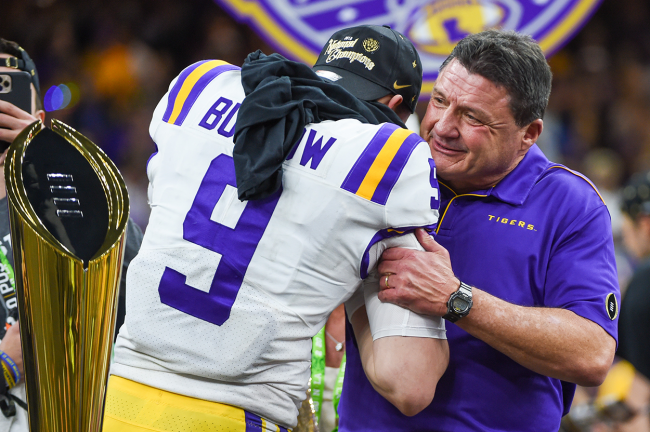 Although Ed Orgeron’s tenure at LSU did not last forever, he did what he was asked to do. After being hired as the head coach of the Tigers in 2016, Coach O led his team to win a national championship in 2019. As a result, he will forever be a legend in Louisiana.

A big part of LSU’s success that year was the offense. With Ja’Marr Chase, Justin Jefferson, and one of the best offensive line units in college football history, the 2019/2020 Tigers were nearly impossible to stop.

At the forefront of that offense was QB1 Joe Burrow. Burrow, who was a four-star recruit out of high school, committed to Ohio State. However, upon arrival in Columbus, he was caught up in the depth chart and never had an opportunity to win the starting job.

As a result, he looked to transfer ahead of the 2018 season and ultimately ended up at LSU. To get him in Baton Rouge, Orgeron had to leverage his brother in the process.

After winning the national championship, Orgeron published a book ‘Flip the Script: Lessons Learned on the Road to a Championship’ with Bruce Feldman. It details the journey leading up to the national title victory.

Of course, that process included the recruitment of Burrow.

In the book, Orgeron talks about how he got Burrow to commit to play at LSU over Cincinnati. He completely alpha’d Burrow’s brother Dan.

Oh my god, Ed Orgeron alpha’d Joe Burrow’s brother until Dan Burrow put together a *microsoft word* doc to give to Joe on why he should go to LSU. Thank you for this, @BruceFeldmanCFB. God bless college football. pic.twitter.com/4sFYTKmwWo

Orgeron has never been one to mince words. He always says what is on his mind, and clearly, back in 2017/18 as he was trying to get Burrow to Louisiana, it worked.