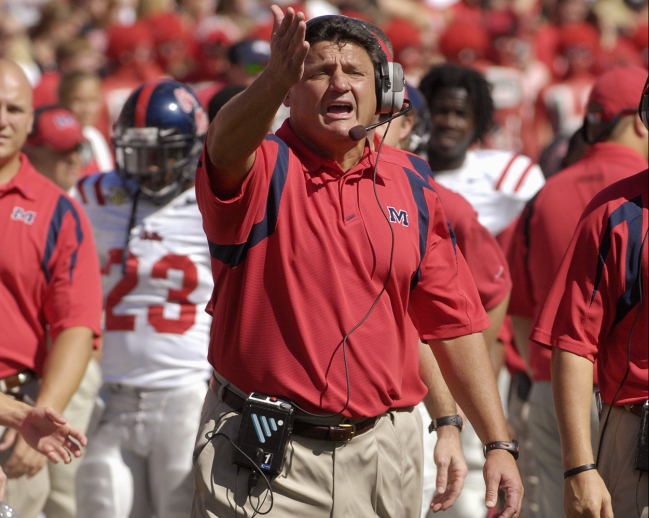 Ed Orgeron has had one of the most unique careers in college football. After working his way up the ranks at schools like McNeese State and Nicholls State, he received his first “breakthrough” role with USC in 1998.

For six years, until 2004, Coach O served as the associate head coach, defensive line coach and recruiting coordinator. In 2005, he took over for David Cutcliffe at Ole Miss.

While there, Orgeron cut his teeth as a head coach but did not do very well.

In three years with the Rebels, Coach O went 10-25 overall and 3-21 in the SEC. During a weather delay during a 2006 home game against Wake Forest, Orgeron had his team go through an 80-play practice in full pads. Ole Miss went on to lost by 24 after the game resumed.

It was not a great tenure on the field.

Orgeron joined the Dan Patrick Show on Friday and spoke about his craziest recruiting story.

It occurred at Ole Miss.

As the story goes, and it is also documented in Bruce Feldman’s book ‘Meat Market,’ his rival literally hid a recruit to keep him from signing with the Rebels.

The recruit, who Orgeron did not name (but can be found very easily if you are interested), was committed to Ole Miss. But the staff in Oxford, including Coach O, could not get in touch with him.

On the night before the dead period, where coaches cannot contact players, Coach O sent a group of Rebel coaches to the recruit’s house. When they got there, Mississippi State was also at his house, and they couldn’t get in.

Orgeron told his coaches to keep trying until midnight, but they had no luck. The dead period began at midnight and at that point, it became illegal to contact the recruit.

On Monday, the recruit did not go to school. On Tuesday, it was the same. And then on Wednesday, he signed with the Bulldogs.

Where was the recruit? Mississippi State had him hide in the back of a church for three days.

Seriously. That’s a real thing that happened. Mississippi State, to the surprise of no one, really did that.

Hear Orgeron tell it in his own words: