Ed Orgeron’s Mom, Coco, Has ’60 Minutes’ Eat Her Gumbo Before They Sit Down For An Interview 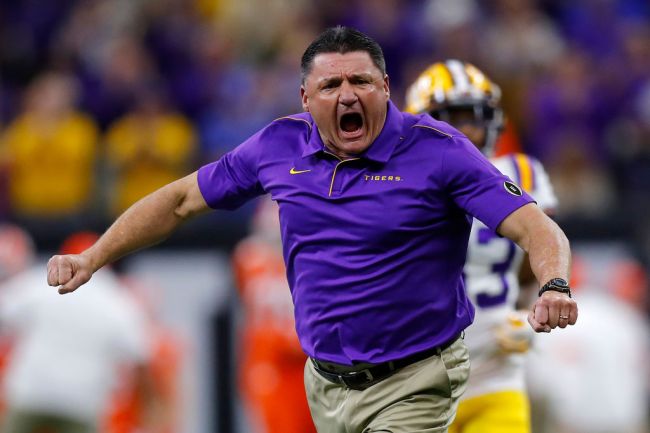 Ed Orgeron was featured on ’60 Minutes’ on Sunday night and as you’d expect, it was a wildly entertaining 20 minutes. While the focus was around Orgeron’s journey to becoming LSU’s head coach and reflections of last year’s national championship season, the program took us back to Coach O’s stomping grounds of Larose, Louisiana, but it was Orgeron’s mother, Coco, who really stole the spotlight.

As CBS arrived on the scene at Coco’s home in Lafourche Parish, she greeted the team as all great Southern moms do, with food. As someone who’s from the South myself, if you walk into someone’s house and they don’t at least offer you what is bound to be some sort of a delicious homemade food, then something is very, very wrong.

Coco took things to the next level with her offerings though and served up bowls of homemade seafood gumbo. She insisted they eat a bowl before any sort of interview was conducted. It goes without saying that if there was one single member of that CBS team that turned down the bowl of gumbo they should have immediately been kicked out of the house and possibly fired.

When we visited the town where LSU’s “Coach O” grew up — in Lafourche Parish, about 75 miles down the bayou from Baton Rouge — his mother Coco insisted we eat her homecooked gumbo before we talk. https://t.co/6NgwpsAwie pic.twitter.com/mhfoh9WXnG

Southern hospitality at its finest, right there. You just know that Coco had been looking forward to this interview and I’m willing to bet she called up her son bragging that she’d be whipping up some gumbo for the folks at CBS. That’s how you do life right there, folks.