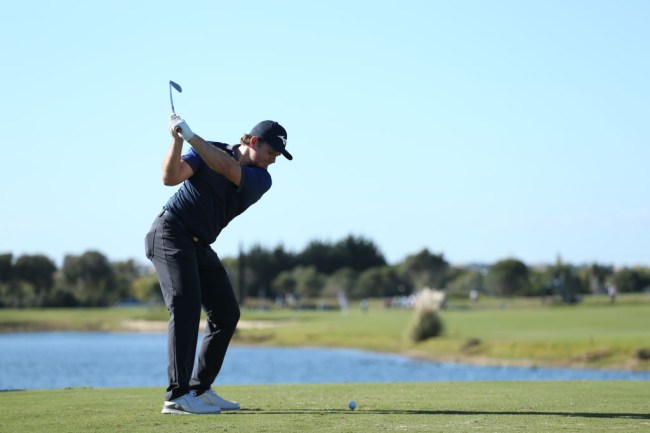 Every casual golfer has been there before. There’s been a moment on the golf course where you get set to tee it up and you realize you don’t have a single golf ball in your bag and you’ve got to embarrassingly ask your playing partner for a ball.

No harm no foul for the casual golfer playing with your buddies, but when you’re a professional playing in a European Tour event it’s a bit of a different story, just ask Eddie Pepperell.

The Englishman ran out of balls during the third round of the Turkish Airlines Open on the Par 5 14th and as a result, was disqualified from the tournament. The official ruling of the disqualification was ‘failure to complete a hole.’

It’s totally fine for your mind to immediately turn to the infamous scene in ‘Tin Cup’ while reading about Pepperell’s situation.

Related: Eddie Pepperell Beat Martin Kaymer At The Portugal Masters, So Now He Gets To Apply Kaymer For Dating Show

According to ESPN, Pepperell hit as many as five golf balls into the water at the 14th. It was so many that even his playing partners Martin Kaymer and George Coetzee weren’t entirely sure about the number of shots he put in the drink.

“Eddie hit his shots to the green then came over to tell us he had run out of balls,” Kaymer told reporters in Turkey. “Then he walked off. I thought he lost four or five. We are about 80% sure it was five, 20% four. He was quick, so it was hard to keep track. He did not ask if he could borrow one from me or George. It did not look like he wanted to play. He did not putt with his putter on the third hole; he putted with a wedge. So there was a lot happening.

“I have never seen anything like that before. I only watched it on television, in ‘Tin Cup.’ This is the first time I have seen it live.”

He could’ve asked his playing partners for another ball, but he would have been given another two-shot penalty then faced a disqualification for violating the one-ball rule.

The 14th hole was just his fifth of the day as he started on the back-nine and he was already two-over for the round.

Pepperell is a character, said in the most positive way possible, and him hitting five balls in the water from the same spot instead of laying up or taking a more favorable drop isn’t necessarily a surprise.

He sticks to his ways, loves a fine bottle of wine and never holds back on Twitter.

Mark is a New York City-based writer and editor at BroBible. You can follow him on Twitter @MarkAndHisWords.