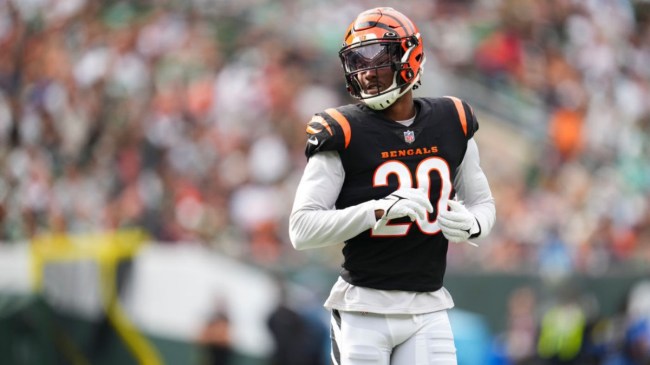 It looks like Eli Apple will get the last laugh after all.

Earlier this week, when Tyreek Hill learned that the Miami Dolphins were playing the Cincinnati Bengals, he immediately had some trash talk ready for the Bengals. Specifically, he was ready to talk some trash to Eli Apple.

Unfortunately for Hill, that trash talk didn’t exactly pan out. The Bengals beat the Dolphins 27-15 on Thursday Night Football.

Hill certainly can’t be blamed for the Dolphins’ loss, posting 10 catches for 160 yards in a game where his starting quarterback was injured in the first half.

However, while Hill had plenty of success in the game, very little of that success came against Eli Apple. Against Apple, he only had 1 catch for 7 yards on 2 targets.

Dolphins WR Tyreek Hill, when Bengals CB Eli Apple was the nearest defender: One catch on two targets for 7 yards.

(via NFL Next Gen Stats)

After the game, Apple spoke to bengals.com and fired back at the trash talk.

It’s always good to win. Especially this week when it’s a little added with people talking. But it’s about who leaves the game with a dub. We did.

Hill has now fallen to 0-3 against the Bengals since Eli Apple joined the team, also losing late in the regular season last year and in the AFC Championship Game with the Chiefs.

Maybe he’ll get another chance to avenge the losses in the playoffs this season, but for right now, it seems like the Bengals and Apple own all of the bragging rights in this matchup.