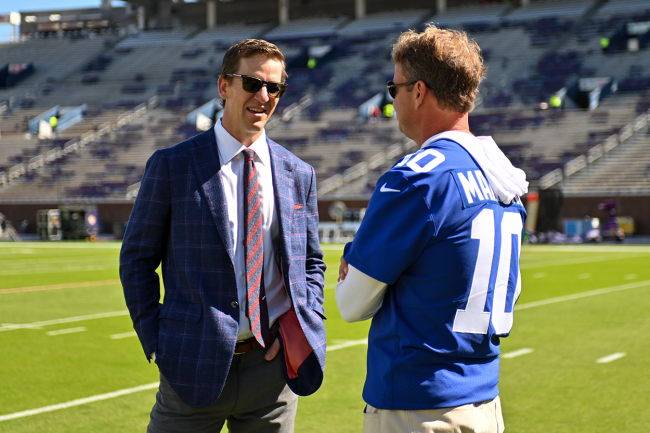 Arch Manning has a lot to learn from his uncle Eli. Both on the football field and as a juggler.

The latter was proven to be true on Tuesday night during an epic apple juggle-off that broke out between the two.

Arch’s senior year of high school is quickly approaching. And then it’s off to Austin, into an intense college athlete lifestyle and onto the NFL.

This summer is last time to really just enjoy being a kid for the nation’s No. 1 recruit (except for on ESPN) in the college football recruiting Class of 2023 and he is spending it with family. Arch and Eli were together on Tuesday when a talented display of athleticism began to unfold.

It’s unclear as to where the two Manning quarterbacks might be, but Eli is rocking a pretty heavy tan and Arch is not far behind. So summer vacation, perhaps? Wherever it is that they are, the place had at least six apples.

Arch and Eli both had three apples to juggle and were pretty impressive with their skills. Eli, however, was too dominant. The future Hall of Famer took down his nephew without much difficulty and looked more than solid enough to keep going.

It would not surprise me at all if the entire Manning family can juggle. Maybe not Peyton or Archie, but especially Cooper. But it seems like Eli is the best in the family.