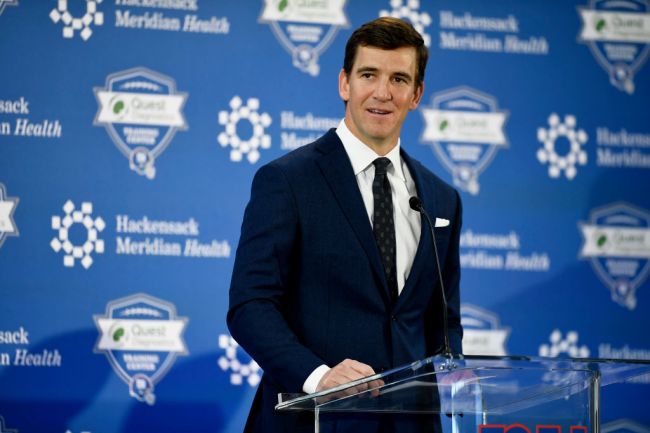 Every other year or so a high school football player gets tabbed as ‘the most highly-touted recruit ever.’ Given the landscape of college football and his last name, Arch Manning may actually be the most sought-after recruit in the history of college football.

Arch, the son of Cooper Manning and nephew to Peyton and Eli, has had the spotlight on him for years already, which is saying a lot given the fact he’s still just a junior in high school.

That spotlight comes with the territory though, especially when you can throw a football as Arch can.

Thankfully, Arch has plenty of family members he can seek advice from that know a thing or two about the game of football and handling expectations.

Eli Manning joined ‘The Pat McAfee Show‘ on Monday afternoon and spoke about the giant expectations his nephew is carrying around and shared some of the advice he’s given him thus far.

“I feel for him. I mean, he’s got so much pressure, so many expectations,” Eli explained. “People say, ‘Hey, I hear your nephew is going to be the best of all of y’all.’ I’m like, ‘Oh, that’s no pressure.’ Peyton just went into the Hall of Fame this year. It’s not hard to become better than him and have a better career.'”

“I told him, ‘Hey, enjoy being a high school football player.’ Like, that is a great time in your life, some of the best friends you’ll have forever. Don’t start thinking so much about colleges or, ‘Hey, where am I going to go play college?’ and think about the next levels where you don’t get to enjoy this time in your life.”

“Just enjoy it, work hard at it, be a great teammate. You’ll figure out where you’re gonna go play college.”

I imagine Arch is enjoying high school just fine being the No. 1 recruit in the class of 2023, but I think we can all understand what Eli is saying here. Don’t wish away the years just to get to college, enjoy high school while you’re there because you can’t ever get those years back.