Emmaunel Acho Has The Worst Shtick In Sports Media 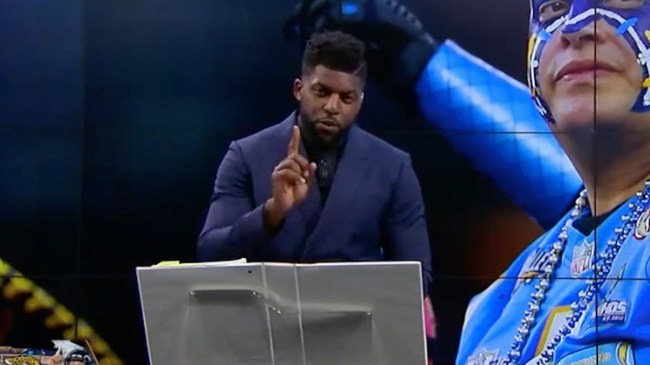 Who, exactly, is Emmanuel Acho? You’d be forgiven if you thought he merely was an A.I. creation that only existed in Twitter videos designed to rile up over-aggressive sports fans.

He’s certainly better known for that than the cup of coffee he had in the NFL from 2012 to 2015, bouncing from benches to practice squads before ultimately falling out of the league entirely.

Still, despite his relative lack of NFL experience, Acho has somehow weaseled his way into a rather prominent position at Fox Sports 1, home of Sports Media Bullshit Czar Skip Bayless. The thing with Acho, though, is that his shtick might arguably be worse than the one Bayless has been putting on for two decades now.

You see, the thing with Skip Bayless is that — despite the act he puts on — he knows he’s the butt of the joke. It’s why he’s embraced the Drip Bayless memes and wears Nike Dunks as a 71-year-old man. It’s why he says things like Tony Pollard is better than Christian McCaffrey or has spent 15 years obsessing over LeBron: he’s a provocateur who knows his only route to success is to provoke.

Acho, on the other hand, is the inverse of Bayless in the sense that while he still displays the same levels of obnoxious bloviation, he lacks the self-awareness to understand that his preposterous proclamations are a farce. His wannabe-TED-talk TikTok cadence isn’t an act because he’s trying to become more famous — it’s real because he’s actually that corny.

My eulogy for the Chargers’ season.

I’m sad to see it go, it’ll be missed:pic.twitter.com/LD2UrDVpY6

Does anyone actually think Skip Bayless believes all the things he says about LeBron James? Of course not! But is Acho weirdly and deadly serious about his faux-hate of Justin Herbert or ardent support of former Baltimore Ravens offensive coordinator Greg Roman? Exceedingly so.

Unlike Bayless, however, he hasn’t realized that not enough people care about Herbert to care about his opinion of him — he’s digging himself a hole that no one would ever fall into because they’d simply step around it. No one cares enough about Justin Herbert to either agree or disagree with Acho, all they know is that he sounds absurd saying it.

We’re not laughing with you, Emmanuel. We’re laughing at you and your half-baked, ripped-off, already-done-better sports media shtick.