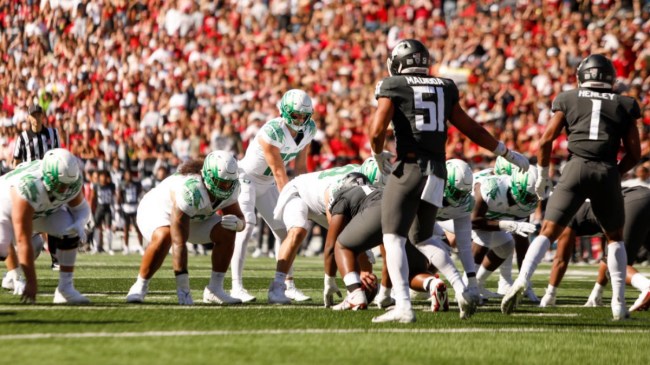 For most of today’s game between the Oregon Ducks and Washington State Cougars, anybody who bet Oregon -6.5 couldn’t have been feeling great about their bet.

Oregon fell behind right off the bat, with Wazzou finding the end zone on their opening drive. The Ducks fought back, getting the game to 10-6 early in the 2nd quarter and had themselves positioned to take the lead about 5 minutes before the half.

Then Bo Nix threw a pick 6 to put them 18 points away from covering. They failed to make much progress from that moment to the end of the 3rd quarter, trailing 27-15 entering the 4th. Then the game got wild.

The Ducks scored right at the start of the 4th to make it a 5 point game, but Washington State answered back with a touchdown of their own with 6:41 left.

The Ducks scored again with 3:50 left in the game to cut the lead to 5. They got a stop and then scored again on a 50-yard touchdown from Bo Nix to Troy Franklin. They were successful on their 2-point conversion to go ahead by 3. Still, with 1:29 left, the cover wasn’t looking good.

Then a miracle happened. Oregon got a pick 6 of their own with 1:01 left to take a 10-point lead and seemingly secure the backdoor cover.

When the commentators know a useless touchdown is the biggest play of the game >>>> pic.twitter.com/kXeWSpVTNN

Just like that, Oregon and Washington State took bettors on an emotional roller coaster in one of the PAC-12’s biggest games of the weekend.