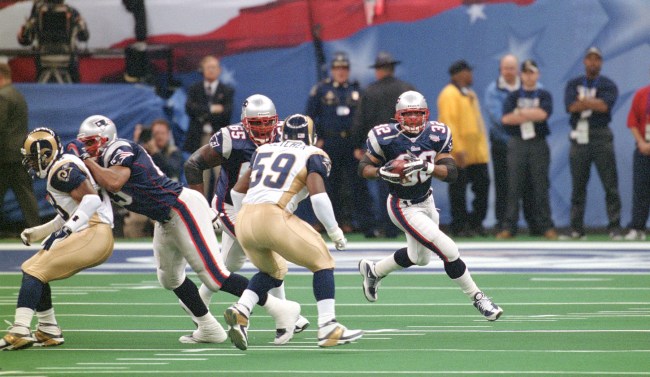 Eric Dickerson, one of the greatest players to ever play for the Los Angeles Rams, still has a bug up his butt about Tom Brady and the New England Patriots beating his old team way back in 2002 at Super Bowl XXXVI.

That 20-17 win over the Rams was the first Super Bowl win for Brady and Bill Belichick and the beginning of what has unquestionably become a football dynasty.

17 years later, Dickerson is once again fired up for a potential Rams vs. Patriots matchup because he wants his old team to dole out some payback because he thinks New England cheated to win their first title under The Hoodie. (He’s not alone, by the way.)

Later, just to throw some more fuel on the fire, Dickerson had the nerve to call Tom Brady old and say his time was done.

“Look, Tom is a great quarterback,” Dickerson continued. “But his time is over. Well, it’s coming to an end.”

"Tom Brady, in football terms, is an old ass man. … His time is coming to an end." — @EricDickerson pic.twitter.com/JEoNUlsrGF

Then, tripling down, Dickerson went on Speak For Yourself and tried to rustle even more jimmies by saying Brady isn’t the GOAT and wouldn’t be who he is without Bill Belichick.

So, to put all of this in perspective. Dickerson is still upset about something he claims happened when these people looked like this during Super Bowl XXXVI…