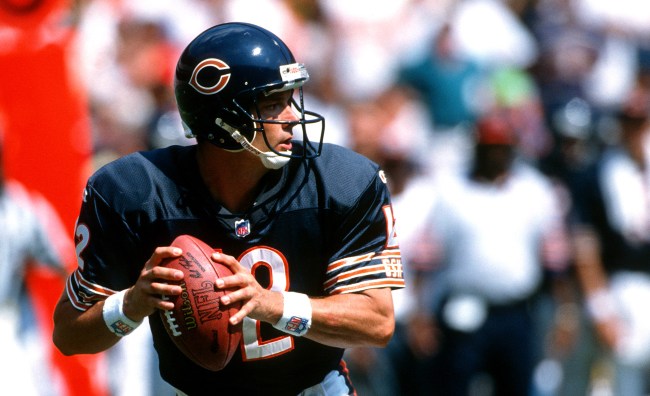 Former NFL quarterback Erik Kramer has had a very difficult life since he retired from playing football. Kramer, who still holds the Chicago Bears franchise records for passing yards and touchdowns in a single season, attempted suicide in 2015 by shooting himself in the head with a SIG Sauer 9mm.

Instead of dying, Kramer, who was depressed over his 18-year-old son dying of a heroin overdose and his mother passing away from cancer, suffered catastrophic injuries from the gunshot when the bullet passed through his chin, tongue, sinus cavities and brain.

Amazingly, according to a new story by Dan Wetzel of Yahoo Sports, after shooting himself, Kramer still managed to answer the telephone, get up and open the door when the sheriff’s department arrived, and walked to the ambulance.

Just one year after his suicide attempt, in 2016, Kramer married a woman named Cortney Baird while he was still going through neurological and psychological rehabilitation. No one from either of the couple’s family were in attendance at the courthouse wedding.

That’s because, according to Kramer, his injuries left him in a state where he couldn’t fully comprehend what was happening.

He had dated Baird off and on from 2011-2014. She reconnected with Kramer in February of 2016, about six months after the suicide attempt. Kramer was unaware, at the time, that two months prior Baird had been charged in Ventura County, California, with two counts related to “obtaining a controlled substance via fraud,” according to court records. Baird eventually pleaded to a single misdemeanor and the case was later dismissed following a payment of restitution.

In the spring of 2016, she drove him back from Las Vegas, where Kramer had been a patient at a neurological therapy center. She ran errands and took him to the doctors. Soon she, along with her daughter, moved into his California home.

“I think she saw an easy target,” Kramer said.

That same year in an an incident report detective David Lingscheit said about the former QB, “it appears Kramer lacks the capacity to make financial decisions based on his own cognitive abilities and thus meets the requirements of a dependent adult.”

“It was basically like marrying a 4-year-old,” said Kramer.

In 2018, Baird accused Kramer of domestic violence after he told her the marriage was over, telling police she was “terrified that he is out looking for me at this very moment and will kill me and my daughter,” before filing for divorce.

In February 2020, Baird was charged with 12 felonies, including counts of elder abuse, identity theft and forgery, and faces many years in prison if convicted. The day after she was arrested, Los Angeles County dropped the domestic violence charges against Kramer.

Baird has claimed innocence on all 12 charges and is currently scheduled to have a preliminary hearing on Sept. 30.