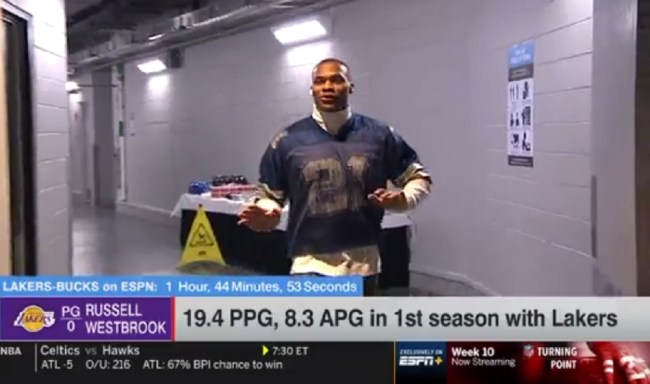 ESPN showed Russell Westbrook walking into the arena and said he was wearing a Barry Sanders jersey. He wasn't. The real story is more interesting: It appeared to be a Julius Jones Cowboys jersey and a statement of support for the Oklahoma death row inmate also named Julius Jones

Julius Jones has been on death row for 20 years and is scheduled to be executed for murder in less than 24 hours. Russell Westbrook is among many pro athletes calling on Oklahoma Governor Kevin Stitt to commute Jones' sentence. https://t.co/sUdE9BlJOG

Back in 2020, Westbrook wrote a letter to Oklahoma Governor Kevin Stitt asking for Jones, who has maintained his innocence, to be exonerated.

“I love Oklahoma and the time I spent there. The Oklahomans I met are empathetic, kind, and just, which is why it was easy to form such a special connection with the state and its people,” wrote Westbrook, a storied leader of the Oklahoma City Thunder from 2008-2019. “Unfortunately, I am contacting you today because I believe the state’s criminal justice system is on the verge of carrying out a grave injustice, one that is inconsistent with the values of the Oklahoma I know and love.

As I have learned more about the case of death row prisoner Julius Jones, it has become readily apparent to me and many others that his conviction was tainted by a deeply flawed process”