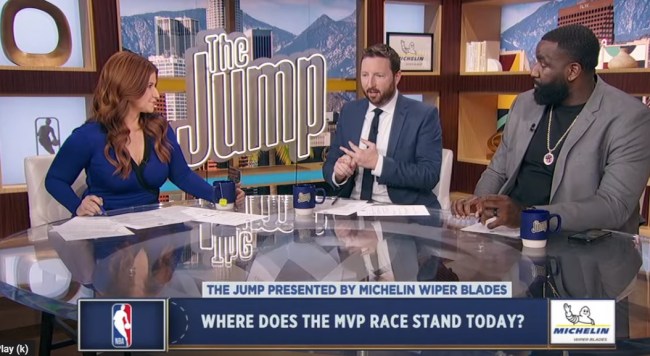 After beating the Milwaukee Bucks and LA Clippers over the weekend, hot take shows on ESPN have decided to debate whether LeBron James was worthy of MVP consideration over Giannis Antetokounmpo, who is averaging 29.6 points, 14 rebounds and 6 assists in 30 minutes.

During Monday’s edition of ESPN’s “The Jump”, NBA reporter Dave McMenamin says he believes LeBron has the edge in the MVP race because of the way he’s handled stuff outside of the court like the China controversy and Kobe Bryant’s death this season.

This isn’t the first time an ESPN reporter has used Kobe’s death as a narrative to give LeBron the MVP award. Here is Rachel Nichols about a month ago during an NBA primetime pregame show.

Rachel Nichols on Lebron: "there are people who say that he should be ahead of the mvp race just because of what he's doing, where he's doing it, and now of course the burden with everything that happened with that team and Kobe Bryant's tragic death" pic.twitter.com/zbeOX9NcGI

NBA fans found it to be distasteful of ESPN to use Kobe’s death and not stats as a metric for LeBron to win the MVP.

"Navigating a China controversy & biggest tragedy in #NBA history."🤮B/C he's the ONLY mourner & the entire burden of Kobe's death rests on his HGH-built shoulders??! So if he gets MVP for his "plight," what does Vanessa get? You vile, inhumane barbarics.

They're using Kobe's death to justify Bron winning MVP? First of all, Giannis was also close to Kobe. Secondly, using death to further a MVP campaign is DISGUSTING! https://t.co/TDJq6JKwdY

This is disgusting from @Rachel__Nichols, @mcten and @KendrickPerkins to try and use Kobe Bryant's death to make a case for Lebron James to be MVP.

Shame on all 3 of you and anyone at ESPN who approved the production of this segment. https://t.co/0SNnr5FIWK

Didn’t want to really say anything but it’s been bothering me: LeBron James just outplayed Kawhi Leonard and Giannis Antetokounmpo on both ends of the floor in back to back games, let’s stick to his basketball case about his MVP candidacy without invoking Kobe’s death, PLEASE

Lebron has been amazing without a doubt this season, but this is disgusting

In no way shape or form should Kobe death (or any non basketball reasons) should be used in a MVP discussion https://t.co/kUsqIWKuRj

Im all on board for LeBron getting more talk for MVP. But mentioning the China conflict (he sided with the corrupt Chinese government), and Kobe’s death as part of his campaign for the award is pretty irrational.

Neither have anything to do with how valuable he is on the court. https://t.co/Bz0tn6Qx9Z