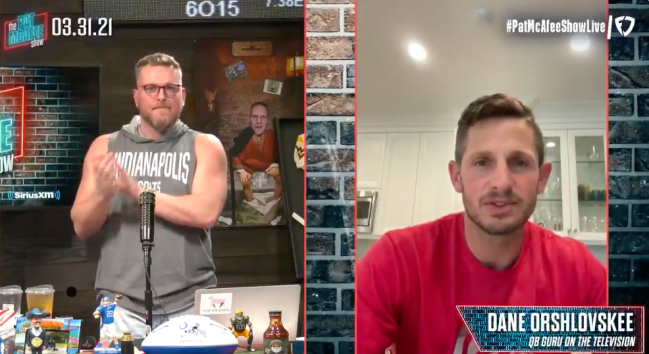 ESPN’s Dan Orlovsky is catching heat for what he reported during his appearance on the Pat McAfee show on Wednesday afternoon.

According to Orlovsky, Ohio State QB Justin Fields may fall in the draft because several teams are questioning his “work ethic” and his overall desire to play football.

Fans and media alike were not happy with Orlovsky regurgitating what they felt was racially biased commentary from anonymous NFL scouts.

It always appears that certain QBs are labeled as lazy or lacking a great work ethic while others are lauded for their IQ & mental capacities. It would be nice if we wouldn’t routinely affix stereotypes to ONLY Black QBs. Non-Black QBs NEVER get these labels on TV. Weird, right? https://t.co/CZ7exbvjAc

These media narratives created from anonymous sources impact the perception of Black QBs. Fair or not, these labels stick & impact how fan bases view QB prospects beyond the pre-draft process. It’s all good to offer critiques but it would be nice to see non-stereotypical analysis

Not Dan Orlovsky being the one laundering the same tired, anti-Black QB quotes, who would’ve thought https://t.co/ubcU3SdqMp

Looks like it’s Code Season in the NFL again ⏰📆 https://t.co/LUa7pPGF4Q

Thank you @danorlovsky7 for reminding us all that football is just as racist as it was in 2000 when 13 teams had yet to start a black quarterback. The n-word may be out of style but people like Dan Orlovsky make sure racial bias never dies https://t.co/ouGy8l49l2

Everything going on with Justin fields is racist. Y’all can’t tell me otherwise.

Zach Wilson had these same people ready to bust in their pants over his pro day. The whole shit is wack.

Orlovsky tried to defend himself from the criticism he received from social media.

1) Check my timeline on what I HAVE SAID ABOUT FIELDS
2) it’s not my opinion on him it’s others and I said those others were people that are tied to decision making
3) I said back in Feb the Big 10 doesn’t have football without JF-says plenty.

Dan, genuine question: Why do you decide to shares these stereotypical thoughts that decision makers have about Black QBs?