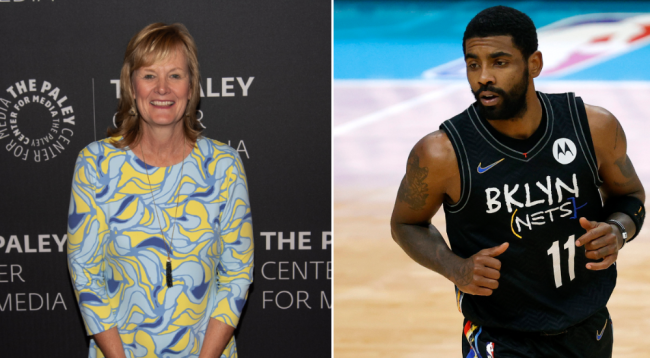 Kyrie Irving’s mysterious absence from the Brooklyn Nets has been a hot topic of conversation in NBA circles but Jackie MacMullan’s take on the situation may have gone too far.

Earlier this week it was reported that Kyrie had decided to take some time off because he was upset over “everything that is going in this country’ following the US Capitol riot.

While talking about the Irving situation on Ryen Russillo’s podcast, MacMullan told a story about the time she once got into an argument with Kyrie about the NBA draft. During the argument, Kyrie told her that players should go to whichever team they wanted because “we’re not someone’s property” to which he responded by saying “yeah, you are dude that’s the way it works, that’s why you get paid millions of dollars.”

On the Russillo pod, Jackie MacMullan recalls a conversation with Kyrie Irving where he stated that there should be no NBA draft because players aren't property, and MacMullan replies 'yeah you are dude, that's the way it works. that's why you get paid all these millions.' 🙅🏻‍♂️🙅🏻‍♂️🙅🏻‍♂️ 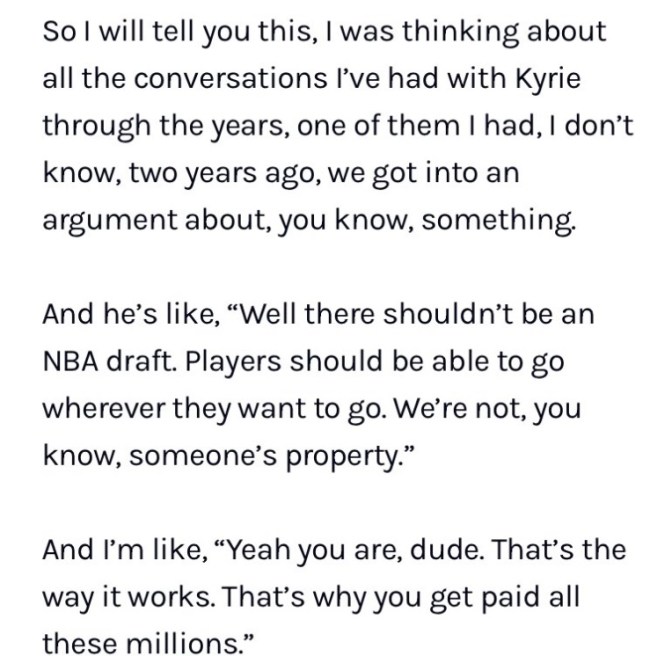 MacMullan’s comments didn’t sit too well with NBA fans who felt she was being racially insensitive.

i love jackie mac but oh boy did she put her foot in it here. i think that this is probably more than anything a reflection of her age and the way athletes were viewed when she was coming up. but its a perfect example of passive/cultural racism. https://t.co/suvXnPsNml

Not only does this look/sound terrible on Jackie's part, but the answer is just wrong lol. The draft is about competitive balance. Such a simple way to address that point from Kyrie, and she chooses…this https://t.co/5ErONtMNJX

I love the game of basketball and especially the NBA, but I hate everything about the way it's covered and who primarily covers it and stuff like this is one reason why: https://t.co/E8cE5bpPBO

hold on…. WHAT???? No wonder Kyrie hates the media pic.twitter.com/V82i1hzno5

didn't think we'd need to have the "people aren't property" conversation again, but uhhh, they're not (for those of you who are still unsure) https://t.co/ZxR4bDXCeV

Has the stampede of sportswriters defending her for this started yet? This is indefensible and patently racist. Black people aren't property to be bartered and sold at whim. https://t.co/GW50L8xTzY

I’ve long respected Jackie MacMullan as a reporter but, phew boy, this is an incredibly problematic take and a bad look. Really, really hope she apologizes and clarifies her point. https://t.co/hNHX2Cmyv0