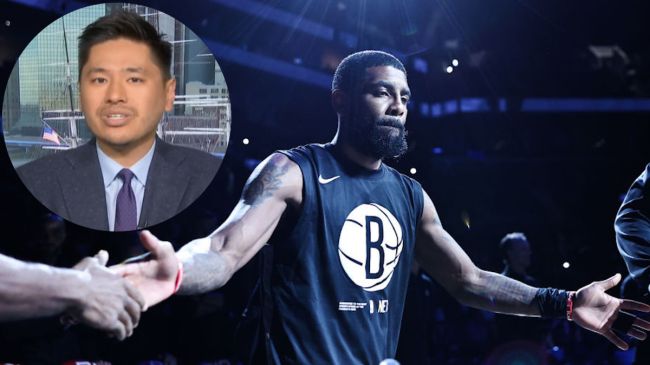 ESPN reporter and personality Pablo Torre, in preparation for his social media show Debatable, watched parts of the movie that Kyrie Irving promoted on his Twitter account (titled “Hebrews to Negroes”) and shared a shocking screenshot that sees the film idealizing a quote from Adolf Hitler.

As Torre points out, though — just to further highlight the stupidity of the “film” — the movie spells his name as “Adolph.”

I started watching the movie Kyrie tweeted out to prepare for today's episode of @debatable. And if you were wondering exactly how insanely anti-Semitic it is, just know that they show this quote from "Adolph Hitler," as such: pic.twitter.com/1Z8bzKzFen

In addition to a screenshot from the film, Torre also researched the book of the same title, which was written by the same person. In the book, the author claims that the six million Jewish people that were killed during the Holocaust is “one of five major falsehoods” and is a result of “the Jewish controlled media.”

P.S. This is from the book that the movie is based on. It’s written by the same director, and it has the exact same title. He calls the fact that 6 million Jews were killed during the Holocaust one of “five major falsehoods” (and blames “the Jewish controlled media”). Not subtle! pic.twitter.com/1rorzaIaDl

So, to be extraordinarily clear here: the quote is (obviously!) fake. Hitler did NOT believe Black people are “The Jewels of God.” They spelled “Adolf” wrong. The citation itself is overflowing with brain-worms.

But this screenshot is *actually from the movie*. Which says a lot!

Torre’s reporting is a necessary addition to the recent Kyrie Irving discourse as it highlights just how disgustingly anti-Semitic the content that he’s promoting truly is.

Despite the resounding outrage to his actions, Irving isn’t showing any signs of backing down as he told ESPN’s Nick Friedell that he’s “not gonna stand down” and that he’ll only get “stronger and stronger” because he has a “whole army around him.”

Irving and his arrogance certainly isn’t making life easy for his employers, the Brooklyn Nets, as he’s not only spewing anti-Semitism off-the-court but has tanked his on-the-court value to new lows, making it virtually impossible for the Nets to get rid of him unless they cut him.