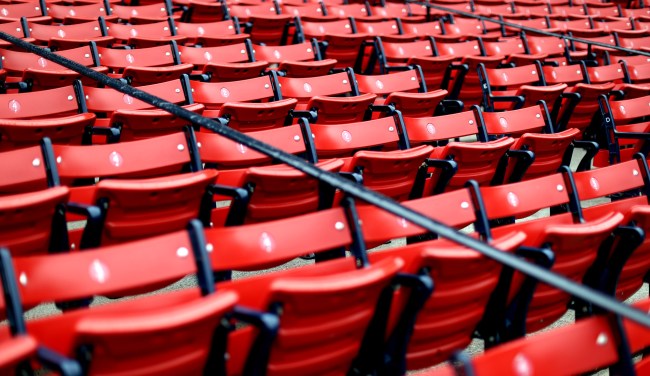 On Monday, four of America’s major sports leagues, Major League Baseball, Major League Soccer, the NBA, and the NHL, issued a joint statement announcing that the media will no longer have locker room access as long as the coronavirus outbreak still poses a threat.

This reaction would be quite different from what Serie A did for its soccer matches recently as journalists were the only people allowed inside the stadiums during the games.

“Given the issues that can be associated with close contact in pre- and post-game settings, all team locker rooms and clubhouses will be open only to players and essential employees of teams and team facilities until further notice,” the statement read.

Many media members were unhappy with this decision, but an infectious diseases expert explained to Yahoo! Sports why not even fans should be in attendance at games as long as the coronavirus is a threat.

Should Major League Baseball consider barring fans from games on opening day and beyond?

“It is an effective infection control mitigation strategy. There’s no question about that,” said Cameron Wolfe, associate professor of medicine in the division of infectious diseases at Duke University health system.

“I’d much rather sit next to the person that has coronavirus than measles,” Wolfe said — the coronavirus possesses a couple of key characteristics that makes big venues like baseball stadiums particularly dangerous. First, that it has a better ability than something like the flu to survive on surfaces outside the body. And, critically, that a lot of infected people don’t know that they are.

“I think what’s becoming clear is that for younger, healthier individuals, they don’t necessarily feel super sick. And so they may not feel sick enough to give up their basketball ticket, or the first game of the Mets,” Wolfe said. “And so they’ll show up, unaware that the 80-year-old that’s got the ticket beside them is actually much more prone for a much more severe outcome should they get the virus as a result.”

lotta people like "stay home if you're 80 and don't want to die of COVID19" but 1. you seem nice and 2. maybe you're a healthy-seeming 20something with asymptomatic coronavirus seated next to a 50yr old woman CARING FOR her 80yr old parents.

“In the non-ideal world where I can’t quickly identify everyone who’s positive and get them out of the way of others who may be more at risk than them,” Wolfe added, “then you have to start thinking about these otherwise seemingly draconian strategies, like when do I cancel large gatherings?”

So will America’s major sports leagues eventually follow Serie A, the Champions League, and Formula 1’s Bahrain Grand Prix and hold events without fans in attendance or will they take the route Japan’s Nippon Professional Baseball league, the ATP’s BNP Paribas Open, the International Ice Hockey Federation Women’s World Championship, MMA’s Combate Americas, and every sporting event in Italy and just postpone everything?

🧐Protecting players – what about spectators?