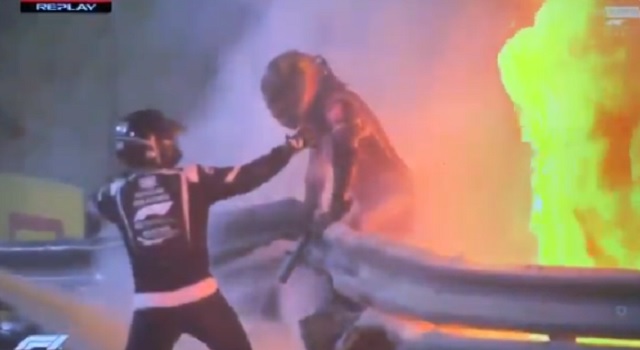 There was a scary scene in Sunday’s Bahrain GP F1 event.

During the race Swiss-born driver Romain Grosjean was involved in a horrific accident that saw his car explode and immediately burst into flames after impact.

One of the scariest things I’ve watched in motorsport, amazing to see Grosjean was able to get into an ambulance on his own feet pic.twitter.com/YwRbf1lz3t

The close-up view of Romain Grosjean being rescued from this fiery crash in Bahrain today is absolutely terrifying — and amazing… pic.twitter.com/aU9PXUsMiB

Grosjean was somehow able to make it alive out of the crash with only minor injuries.

Haas confirms Grosjean has some minor burns on his hands and ankles, but otherwise is OK. Now with doctors #F1 #BahrainGP

Romain Grosjean miraculously managed to survive this fiery crash that left his Formula 1 car in half. Unbelievable pic.twitter.com/k6OzSU85wx

that Grosjean crash looked horrific, but he was able to jump over the barrier and away from the car that got split in half. It’s a miracle he’s walked away from that 😱 pic.twitter.com/cWZU4SmjQ9