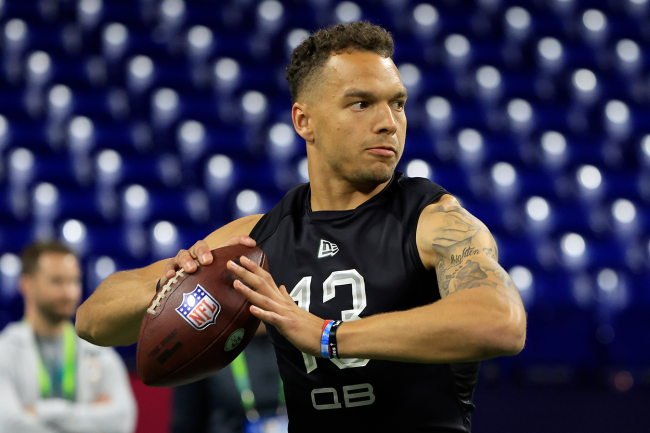 By all accounts, Marcus Mariota will be the starting quarterback for the Atlanta Falcons this fall. The team acquired the former Heisman Trophy winner during the offseason and plans to put him under center come Week 1.

However, behind Mariota, a rookie quarterback is going to be nipping at his heels.

With No. 74 overall pick in the 2022 NFL Draft, the Falcons selected Desmond Ridder out of Cincinnati. The 22-year-old two-time AAC Offensive Player of the Year led the Bearcats to the College Football Playoff last fall and earned the right to compete for a starting job in his rookie year.

While becoming QB1 in his first year does not appear to be a legitimate opportunity, Ridder has been impressing the organization throughout rookie camp, OTAs and minicamp.

“Behind the scenes, the things that he has done, as a rookie, really from the neck up,” head coach Arthur Smith said last week. “How he’s operating, when we’re doing the rookie walk-throughs, when we do these installations and on the field, and his command. Then you’re betting on some of the physical things you see at times to catch up. He’s light years ahead of most young quarterbacks, in terms of playing from the neck up. I will give him that compliment.”

And he’s also impressed himself.

Ridder recently spoke about how quickly he has learned Atlanta’s offense and says that he feels good about where he stands. College and NFL playbooks are vastly different in most instances, with the latter being more complicated, so having it down already is impressive.

“The overall knowledge of the offense – I’m not going to lie, I thought I would come in and struggle a little bit,” Ridder said. “We’re almost all the way through all of our installs and putting in all those checks, and I have a good grasp of it. That surprised me, honestly. I’m not saying I wouldn’t have picked it up, but I thought it might’ve taken a bit longer, a couple of extra days. I’ve been able to pick up on it pretty smoothly.”

Ridder will be in waiting this fall, but it’s always a good thing for a team to know that its backup is prepared in case something goes wrong.