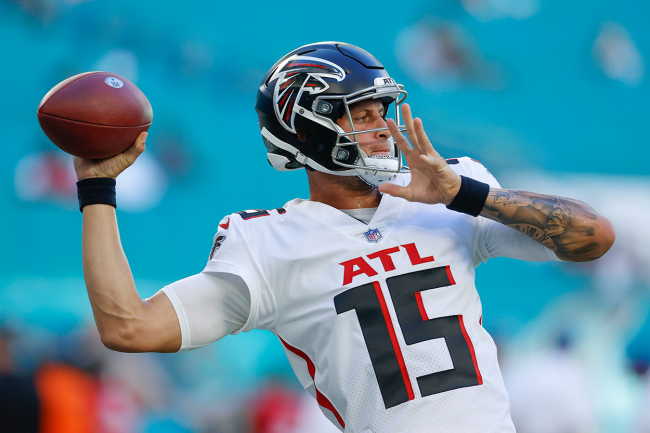 The Atlanta Falcons have high hopes to start turning things around in 2022. As that quest for success begins, the quarterback position is expected to be led by Marcus Mariota, who signed with the team during the offseason.

Behind Mariota, Atlanta drafted Desmond Ridder out of Cincinnati in April. That leaves 2021 backup Feleipe Franks as the odd-man out.

As the team tries to sort out its depth chart, it doesn’t appear that Franks will factor into the quarterback equation. At the most, he will be the third-string emergency option if he makes the 53-man roster.

Should that end up happening, he will not be listed as a quarterback. Franks was not wearing a red jersey during OTAs on Friday and was working at a new position with the tight ends.

Could be something, could be nothing: Feleipe Franks (far left) with the tight ends at open practice. Arthur Smith did say we’d see some players in different places. pic.twitter.com/sF1DxasdPZ

Now, Franks stands 6-foot-7, 228 pounds, so his frame translates well to the pass-catching role. He just hasn’t played that position before, after starting two years at quarterback at Florida and one year at Arkansas.

Something to note with Franks, beyond his size, is his speed. At the NFL Combine in 2020, the former four-star recruit out of Crawfordville, Florida ran a 4.61-second 40-yard dash. That time is exactly the same as NFL superstar tight end Travis Kelce.

Obviously, Franks has a lot of work to put in before he can even think about making the 53-man roster. The Falcons may choose to move him back to quarterback.

However, whatever is to happen in the future, he is at least getting the opportunity to show his versatility as an athlete and make the transition to tight end.