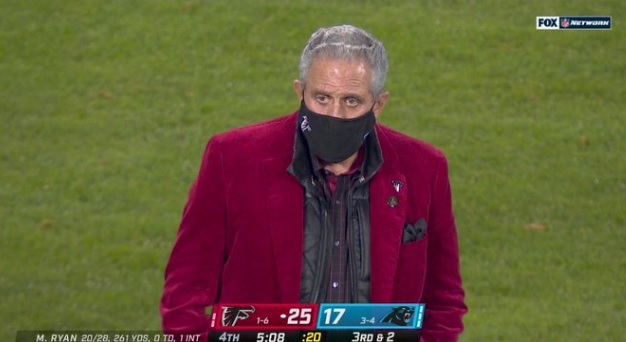 Falcons owner Arthur Blank might have a new lucky jacket.

During the 4th quarter of the Panthers-Falcons Thursday Night Football game Blank made his way onto the sidelines which instantly made Falcons fans nervous.

The Falcons are 0-856 with 570 blown leads when Arthur Blank stands on the sideline before the game is over. Let’s see if that’ll stand tonight. #ATLvsCAR pic.twitter.com/k0jnxWIylU

Thankfully the Falcons were able to hold on to the lead to win the game and fans moved on to roast Blank for his red velvet jacket.

Arthur Blank about ready to head back to his mansion for a midnight swim in the grotto with a few bunnies. pic.twitter.com/XtB32P9jpa

How nice of Arthur Blank to get dressed up for the holiday! pic.twitter.com/2wBHLyBWpt

Glad Arthur Blank could make it over from the Player Haters Ball pic.twitter.com/8yoRXFUR3V

Arthur Blank out here looking like he collects money from ladies of the night https://t.co/aOsSm7HfYn

Arthur Blank looks like he’s desperately trying to keep his vampire daughter from falling in love with a human pic.twitter.com/wPHqUxYDd0