Jimmy Fallon Got Dalvin Cook, Gronk, And Other NFL Players To Drop These Weird Words Into Interviews 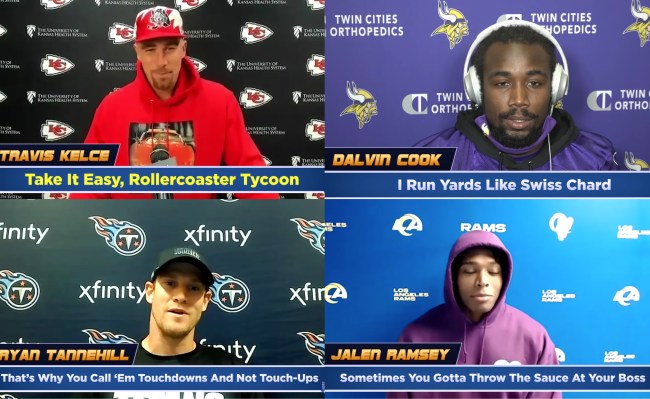 This isn’t the first time that Jimmy Fallon has revealed himself as the puppetmaster being pro sports interviews and it probably won’t be the last.

Somehow these outrageous interview moments seem to pass by us in the moment until we see Fallon put them together into a compilation and suddenly it clicks, that he was pulling the strings all along and getting these NFL stars to say outrageous things on camera.

Jimmy got former FSU running back and current NFL rushing leader Dalvin Cook (4 more TDs than Derrick Henry) to drop ‘I run yards like swiss chard’ into an interview and nobody seemed to bat an eye. He got D.K. Metcalf to talk about Pokémon which didn’t seem to raise any red flags. Fallon also got Rob Gronkowski to mention drizzling like maple syrup.

Individually, none of these moments drew too much attention. They might’ve made for a great tweet here or there but when put together and it was revealed that Jimmy Fallon was behind it all then I can at least respect the hustle here.

On what planet were any of us ever supposed to believe this is actually something that Gronk’s mother used to say: “It’s like a saying my mom used to say. ‘It must be maple syrup because butter don’t drizzle like that.”‘ Also, Jalen Ramsey (another FSU great) is right. Sometimes you really do ‘gotta throw the sauce at your boss’ that’s just life. That’s not even a weird phrase to toss into an interview, it just makes sense.

It’s unclear how Jimmy Fallon enlisted all of these NFL players in his master plan to manipulate post-game interviews but I like to imagine they all have one enormous group text together where they put forth outrageous phrases and vote on who says what and peer pressure each other into actually going through with it.