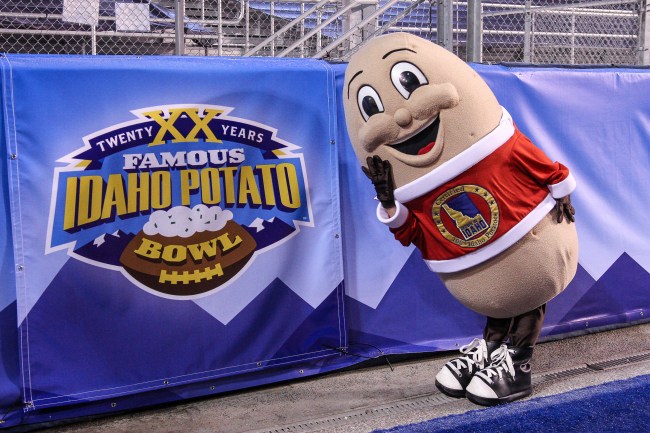 BOISE, ID - DECEMBER 22: Spuddy Buddy, the mascot of the Idaho Potato Commission cheers during second half action between the Colorado State Rams and the Idaho Vandals at the Famous Idaho Potato Bowl on December 22, 2016 at Albertsons Stadium in Boise, Idaho. Idaho won the game 61-50. (Photo by Loren Orr/Getty Images)

ESPN and pro sports franchises certainly prop up the bowl system, but a closer look at one low-tier bowl game indicates that even with poor attendance sponsors can make money. Despite the ’17 Famous Idaho Potato Bowl drawing just 16,512 fans (in seats), the bowl was a success with 1.5 million watching at home on ESPN. According to the Idaho Potato Commission (IPC), a recent independent study indicated that a bowl television audience of 2 million viewers (the average for this game) equates roughly to a four-hour infomercial about Idaho potatoes; worth $13 million in media value. Even with just 75% of the anticipated audience tuning in (and that figure does not account for fans streaming), the Idaho Potato Commission (IPC) expects an ROI of over 2,000%.

Howie Long-Short: The returns have been so good, the IPC recently signed a 5-year extension worth $2.25 million to remain the title sponsor of the Boise based bowl game. What makes the IPC a sensible sponsor for this game, as opposed to the previous 5 corporations/organizations that paid to sponsor the event? The conferences tied to the game (MAC & MWC) contain schools located in 4 of the 5 states that consume the most potatoes. Know your audience!

Fan Marino: Lower-tier bowl games may struggle to put fans in the seats, but that won’t be an issue at Monday night’s championship game, projected to be the most expensive of all-time. With the game scheduled to be played at the Mercedes-Benz Dome in Atlanta, secondary market ticket prices jumped 15% following Georgia’s double OT win at the Rose Bowl and another 10% as Alabama rolled into the title game. Get in price (as of 7p EST on 1/1/18) for the game is $2,492, up 43% ($1,737) from last year and 1,133% ($202) in 2016. Looking to go to the game? TicketIQ, a leading ticket search engine, has a low-price guarantee on about 20% of listings for the game.

AdAge published their Top 50 most watched broadcasts of 2017 and despite a 9% YOY NFL ratings decline, 37 were NFL games; up from 28 in 2016 (Olympic year) and matching the league’s total from 2015. 9 of the Top 12 were NFL games and Super Bowl LI was the most watched program. 11 other playoff games made the list, as did 6 Sunday Night Football games, the season opener on NBC and 18 CBS and Fox Sunday afternoon windows. The highest rated non-NFL sporting event was Game 7 of the World Series (#13, 28.2 million); Game 5 of the NBA finals was the NBA’s highest rated game (#23, 24.5 million).

Howie Long-Short: On a network basis, Fox had the most sporting events in the Top 50 with 15; including the Super Bowl, 4 NFC playoff games and 2 World Series games. CBS and NBC each had 13. ABC, which does not have regular season rights to the NFL, had just 5 of the Top 50 broadcasts. NFL ratings are down, but ad sale revenue is up 2%, makegoods are down and the average cost per spot is up 1% from the 2016 season.

Fan Marino: Former adult film star (and social media influencer) Mia Khalifa is building a name for herself within the sports world; co-hosting a show on Complex News’ YouTube channel with Gilbert Arenas and starting a Twitch channel to play NBA2K and NHL ‘17. Now she’s using the platform to call G-League games. With 10 minutes to go in the 1st quarter of last night’s game, more than 3 million people had tuned in. It’s not an apple to apples comparison, but just one NBA game this season had 3 million viewers (GSW vs. OKC on November 22nd). I may not ready to give up Mike Breen, Marv Albert and Ian Eagle for Khalifa; but it appears there is an audience who is and prefers a co-hosted stream to the traditional broadcast.

Facebook Watch (FB) has announced partnerships with both the WWE and National League Lacrosse (NLL), giving the burgeoning video platform additional sports content. Beginning on January 16th (10p EST), a new weekly in-ring wrestling series entitled “Mixed Match Challenge” will debut; wrestlers from both Raw and SmackDown rosters will compete in a single elimination mixed tag-team tournament that spans 12 weeks. Watch will also begin airing a new weekly show from NLL productions entitled ReLax that offers fans insight and analysis on the weekend’s games. The show, airing exclusively on the Watch platform Mondays at 6p EST, will give fans a chance to interact and ask questions during the first hour of the show.

Howie Long-Short: The WWE experienced their “all-time best quarter” in Q3 ‘17, as the company grew revenue 14% to $186.4 million, set a company quarterly record for adjusted OIBDA ($40.4 million) and saw net income rise to $21.8 million (from $11.1 million YOY). The company will release its Q4 ’17 (and full year ’17) earnings report on Feb. 8th. 2018 projects to be a banner year for the WWE, with the company anticipating setting another record for revenue generation and targeting adjusted OIBDA of at least $115 million; which would also set a record.

Fan Marino: Mixed Match Challenge episodes will run 20 minutes in length and be optimized for mobile consumption. The social interaction elements included will be worth watching, as fans will have the opportunity to select match-ups and match stipulations. Teams will be announced beginning tomorrow night. You can find a list of participants, here.