Ecuadorian Fans Hilariously Chant ‘We Want Beer’ At World Cup, Others Sneak Alcohol Into The Stadiums 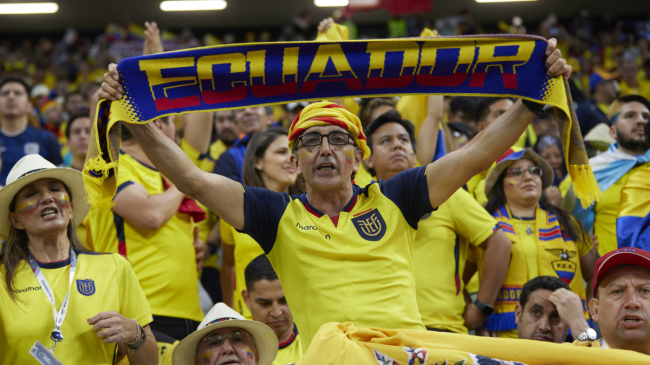 The World Cup is in full swing Sunday with Ecuador opening play with a big win over host country Qatar. Ecuadorian supporters that made the trip have been seen cheering on the soccer team at Qatari supporters’ expense, but if they had it their way, another key component of the celebration would be included.

The fans were heard chanting, “We want beer,” as the national team ran off with a 2-0 victory in Group play.

The Ecuador national team is leading in the match with Qatar at the World Cup.

It’s been widely discussed that a World Cup tournament in Qatar would result in a number of restrictions for fans and visitors. Those making the trek to the Middle East will have to play by the rules in a country that’s much more conservative when it comes to things like alcohol consumption, public displays of affection, and many other personal freedoms we enjoy in the US.

A perfect example of this came just days before the event as Qatar pulled the plug on alcohol sales at the stadiums. Despite being sponsored by Budweiser, FIFA made the executive decision to only sell non-alcoholic beverages to attendees.

It was the final straw for many following reports of journalists being accosted and dilapidated fan village areas. There have even been rumors of match-fixing attempts, which obviously didn’t come to fruition with Qatar’s 2-0 loss in the opener.

But messing with people’s ability to enjoy a cold, delicious beverage while they cheer on their favorite team is cause for riot. Despite the restrictions, many are taking matters into their own hands.

Many fans have posted pictures of their sneaking beer into World Cup stadiums.

Some supporters have obviously found the technique to drink alcohol in stadiums in Qatar. 👀🍺 pic.twitter.com/KqaLlHsfpy

The threat of being locked up in a Middle Eastern prison is apparently not scaring off some World Cup fans from bringing their own beer into the stadium.

Those that might need it most are the supporters of the host country, who’s World Cup has gotten off to a tumultuous start.

These angry Qatar fans look like they could use a beer

Play continues on Monday morning with England taking on Iran at 8 AM EST. The United States kicks off their action at 2 PM with a matchup against Wales. We’re likely to see a few more of these fan photos as onlookers find creative ways to sneak their alcohol into the stands.