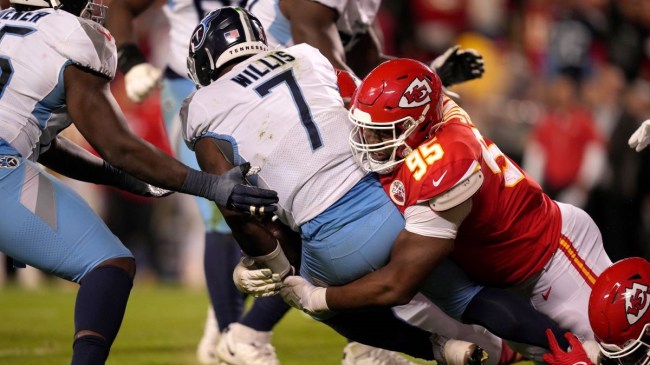 When the Tennessee Titans selected Liberty quarterback Malik Willis in the third round of the 2022 NFL Draft, it was likely with the idea that he’d sit and learn behind starter Ryan Tannehill.

Willis is a remarkable athlete with a big arm and the running ability to create something for nothing. But his lack of polish is what led scouts to drop him down their draft boards.

Unfortunately for the Titans, sitting behind Tannehill is no longer an option. Tannehill suffered an ankle injury that has kept him out of each of Tennesse’s last two contests.

That led to Willis making his first career start against the Houston Texans a week ago. While he struggled, going just 6-of-10 for 55 yards and an interception, the Titans still pulled out a 17-10 victory. But the difficulty got turned up tenfold on Sunday night when Willis started against the Kansas City Chiefs in Arrowhead Stadium. The results were far from pretty.

Titans coach Mike Vrabel did a good job of insulating Willis in the first half, leaning on superstar running back Derek Henry. A heavy dose of Henry and elite defense by Tennessee gave them a surprising 14-9 lead at the half. But that’s where things fell apart.

The Titans scored just three points in the entire second half, including overtime, and Willis was largely to blame. The rookie finished the game just 5-of-16 for 80 yards and took a number of sacks when he could have thrown the ball away.

The performance looked even worse when juxtapositioned with that of Chiefs superstar Patrick Mahomes.

One of the more lopsided QB box scores you'll ever see pic.twitter.com/QB5L0LNiU1

NFL fans did not take it easy on Willis.

Malik Willis every time he drop back to pass pic.twitter.com/mkq5iFWknw

“Malik Willis in the pocket” pic.twitter.com/zgWhA193W4

Malik Willis has to be the worst QB who has ever started an NFL game. Has to be.

To his credit, Willis seemed to take the difficult showing in stride.

While Vrabel, rightly, deflected some of the blame onto other aspects of the team.

Asked Mike Vrabel sustainability of Derrick Henry taking 26-plus carries every game. “We’ve been able to use him and he’s helped us win a lot of games since I’ve been here. I don’t what else we would do _ throw it 50 times? I mean, who the (bleep) would we throw it to?’’

Meanwhile, former Titans superstar wide receiver A.J. Brown is among the league’s leaders in both receiving yards and touchdown catches for the Philadelphia Eagles.