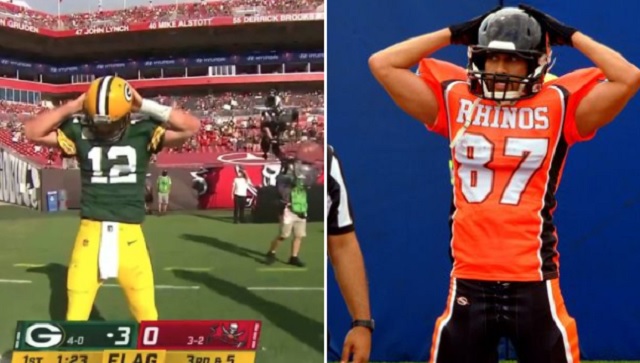 In the first quarter of the Packers-Bucs game, Rodgers busted out key & Peele’s Hingle McCringleberry dance on a touchdown run that didn’t count after the play was called down on the 1-yard line.

After the McGringleberry dance Rodgers had himself a rough game that included two interceptions before the end of the first half.

PICK 6! Jamel Dean takes it to the house! #GoBucs

The Bucs went on a 38-0 run against the Packers after Rodgers’ celebration and the Internet mocked him for it.

The #Packers have been outscored 38-0 since Rodgers shook his dick around like an absolute fucking clown.

The #Bucs are destroying this team.

The data shows that the Hingle McCringleberry should be left to @KeeganMKey and @JordanPeele. #TwoPumps

Let's not forget that Rodgers busted out the Hingle McCringleberry (didn't score the TD), and got shut out the rest of the way. Cocky MFer got punched in the mouth 😆

After the Hingle McCringleberry celebration, Aaron Rodgers with 2 INTs in his last 3 passes 😳 pic.twitter.com/MZF4aDY6HG

Rodgers has thrown 2 interceptions, including a pick six after this. https://t.co/dT0mJ3Qcd4

rodgers did the mccringleberry and immediately threw two INTs. lance moore would never