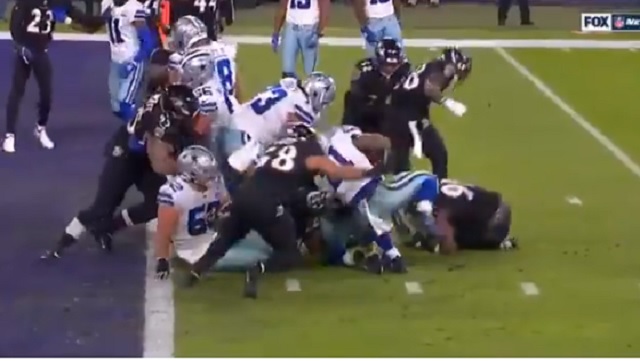 This week was crucial for fantasy football players everywhere as many are wrapping up their regular seasons and getting ready for the postseason. Unfortunately for some owners Ezekiel Elliott’s play on Tuesday may have cost them their chance to make it to the playoffs.

On Tuesday night, Elliott had the opportunity to score some easy fantasy points when the Cowboys were at the 1-yard line in the fourth quarter. The Ravens defense ended up stopping Elliot on three consecutive plays before the Cowboys decided to throw it to Amari Cooper for a TD on fourth down.

Ezekiel Elliott stuffed at the 1-yard line by the Ravens defense pic.twitter.com/kTkBrh5U0U

Some fantasy football owners who had Elliott on their team were absolutely sick that Elliott couldn’t score on the drive.

You’re down 1.5points in a fantasy matchup to win 1st in the regular season and $150. U have Zeke and going against Amari Cooper. 3 chances from the 1 for Zeke, doesn’t get it and then they throw a 1 yard TD to Cooper🤦🏻‍♂️

Might be the worst fantasy loss of my life

The #Cowboys line up in SHOTGUN and Zeke gets stuffed from the 1-yard line on three straight plays only for Dalton to throw a TD on 4th down. #FantasyFootball pic.twitter.com/KokgwsBlzU

I selected Zeke Elliott as my fantasy football ‘Keeper’ this season. Ultimately, his poor performances kept me from making the playoffs.

Missing out on the fantasy playoffs but 4 points over the whole season. Needed two separate people to lose plus outscore one by 38 points….outscored him by 34. Zeke scores from the one I get in.#FantasyFootball#BadBeats pic.twitter.com/ailtN9xTRJ

Lost by 3.42 points…. Zeke had 3 chances to score and failed me, heartbroken doesn’t describe my fantasy matchup

Others were happy about the Ravens defense stopping Zeke.

Ezekiel Elliot got stuffed at the goal line 3 times to save my fantasy football season. There really is a god

Made it to the playoffs in my fantasy football league. The ravens stuffed zeke at the goal line THREEEEEEE times and that blessed me lmao.

Literally just need Ezekiel Elliot to score a touchdown to advance to the fantasy playoffs. He gets the ball at the goal line three straight times and doesn’t score…😑

I’m winning my fantasy matchup by 6 points and my opponent has Ezekiel Elliott. Those goal line stands by the Ravens saved my matchup.