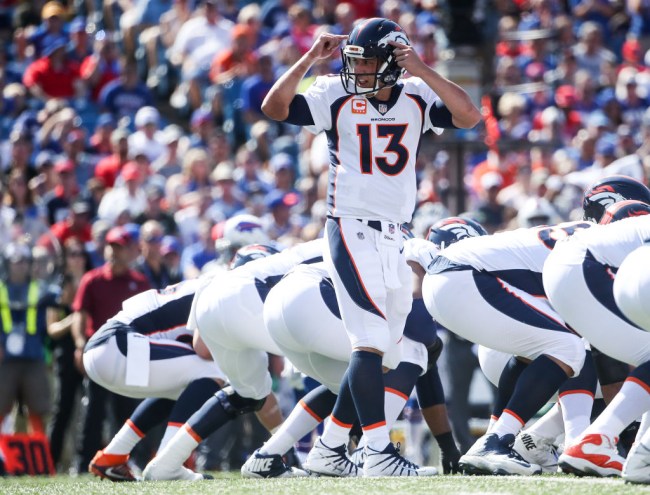 The last 20 minutes of last week’s early games gave us hope for the NFL. Things are slowing turning around on offense and we all know that’s why we’re watching these games. That obviously translates to fantasy as we finally saw some better scores last week. Unfortunately that didn’t lead to any waiver wire pickups this week. The wire was as bare as it’s been all season. That happens, but just realize more players will show up as the bye weeks force teams to add and drop guys. Backup running backs won’t be able to be kept when people are forced to start a new quarterback or tight end. The best is yet to come.

People were heavy on Siemian after his first two weeks of the season, but it wasn’t the best spot for him. Western team traveling east to play at 10 a.m. local time against a good defense in Buffalo is not what you’re looking for. Plus Siemian is a young QB and young QBs tend to play better at home. He returns home this week to go against the Raiders, whose secondary is getting carved up to start the season. The Raiders are giving up fourth most points to quarterbacks this season after giving up the 8th most last year. It’s an ideal spot for Siemian to get back into rhythm.

The time is now for Mixon. Cincinnati finally realized that it wasn’t worth playing Jeremy Hill, so Mixon finally got all the work in the second half of last week’s game against Green Bay. That’s the difference a new offensive coordinator makes. The Browns are an ok run defense, but Cincinnati should be able to score some points and Mixon will be the goal line back. You should feel safe leaning on Mixon for here on out.

Last week was the indication Carson’s owners were looking for. Seattle clearly trusts him as they scratched Eddie Lacy and Thomas Rawls saw one stop. With C.J. Prosise now injured, Carson may even get some passing down work to go along with everything else. In a game where Seattle is favored by 13.5 points, Carson should see 20+ touches and find the end zone at least once.

Tate is generally a quality start in PPR leagues, but this week he should help in any league. The Vikings are great at locking things down on Xavier Rhodes’ side of the field, but can be attacked anywhere else. That’s why they’ve allowed the most passing yards in the league through three weeks, so Tate will see plenty of targets this week and should sine in Week 4.

We all know by now what the Saints defense is capable of and it’s not much. Miami’s offense should bounce back after getting called out by the coach last week and the Saints are the perfect team to play in that spot. Parker got the garbage time score last week, but should be able to give you more early and often in this one.

Clay’s never going to light the world on fire, but he clearly has the trust of his quarterback. McCoy is 2nd in targets for the Bills behind only LeSean McCoy, which shows Tyshawn Taylor is looking for him down the field. Buffalo will likely be trailing in this game, so Clay will be seeing a lot of balls as Buffalo tries to come back.

The fantasy experts including myself have beaten the dead horse about Roethlisberger on the road over the last year, but there’s quite the sample size (in NFL terms) at this point. Roethlisberger also looks a little off to start the season. It’s possible that Father Time is finally starting to get to him, which he may know himself given his comments about retirement in the offseason. He heads to Baltimore this weekend to face a tough Ravens pass defense. We’re going to throw out last week’s clunker in London as a team playing its first game over there. There are plenty of streamers this week to throw out there instead of Ben.

Starting your running backs against Denver is never a good idea and it’s more worrying that Lynch isn’t seeing great usage to start the season. Maybe it’s because he had the year off or maybe the Raiders are starting to keep him fresh, but it doesn’t make you feel all warm and fuzzy inside to start him against a team giving up the fewest running yards per game through three weeks.

While Abdullah is getting a decent amount of touches every week, he’s still not finding the end zone, which is very frustrating. The Lions seem to want to bring in a bigger back near the end zone or throw, which has left Abdullah out in the cold. With no goal line work, things will be very bleak this week with the Vikings allowing the fewest fantasy points to RBs. The Vikings were reasonably strong last year too, so the early season showing isn’t necessarily a blip on the radar.

Crabtree talked a lot of smack last week against Josh Norman and got completely shut down. She shouldn’t run his mouth this week as he goes up against two of the best corners in the league again. Both Denver’s cornerbacks can get physical with Crabtree, who doesn’t have the explosiveness to separate in other ways. It’s a week to leave him on your bench if you have other options.

If we’re downgrading Ben, it means his receivers will take a hit as well. There’s been criticism that he’s focused too much on Antonio Brown so far this season, but there’s a reason: Brown is the best wide receiver in the league. Bryant hasn’t been getting nearly enough targets to be productive and now he walks into a low-scoring matchup, against one of the league’s better pass defenses with a quarterback who plays poorly on the road. That’s a hard pass.

People have been picking Witten up off the waiver wire since Week 1 and loving life. With all the injuries at tight end, Witten has definitely come in handy. He can’t be Mr. Reliable this week, however, since the Cowboys are a big home favorite and expect to be holding the lead in the second half. The Rams are also solid at defending the position finishing with the sixth fewest points allowed last year and in the top 10 again this year.