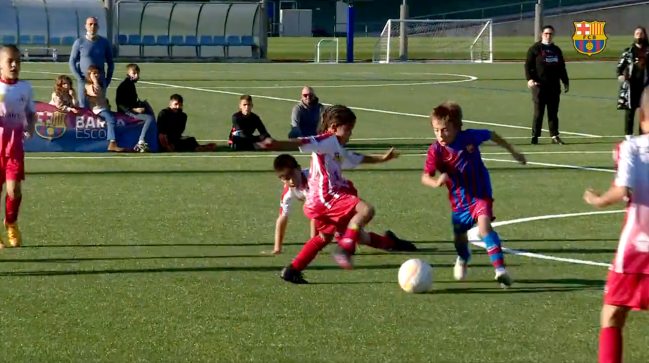 FC Barcelona saw Lionel Messi leave for Paris Saint-Germain over the summer, but it only has to wait a few more years to replace him. During a youth academy match, a 7-year-old scored on one of the greatest runs that you will ever see on any level.

Pedrito Juárez, who was born on February 17, 2014, has recently gone viral for a goal that has drawn comparison to Messi. The match, tied 5-5 in the final minute, quickly swung in favor of La Masia (Barcelona’s youth academy) as Juárez took over.

He begins the ball at midfield, dribbles his way through the entire defense, puts three opponents on the turf, and then drills the ball inside the left post. It’s remarkable.

Messi and Juárez quickly followed, despite their difference in dominant foot.

Currently, Juárez is playing for Barça’s pre-Benjamin side, in an age category that runs from six to eight years old. His presence will be welcomed on the Benjamin level in two years. There, teams compete in the high-level Catalan Federation league.

In the meantime, Juárez is being labeled a ‘wonderkid’ and for good reason. Just look at this magic!

The way that he is able to run the full half of the opposition’s pitch, slalom in and out of defenders and finish with such power is truly unmatched on any level. And Juárez is only seven!!!

Perhaps the best part of the entire video is the celebration. Cool, calm, collected and confident.

Juárez knows he has talent and the swagger comes with it.