The Topless Female Argentina Fans Have Been Identified, And So Far They Are Not In Jail [Updated] 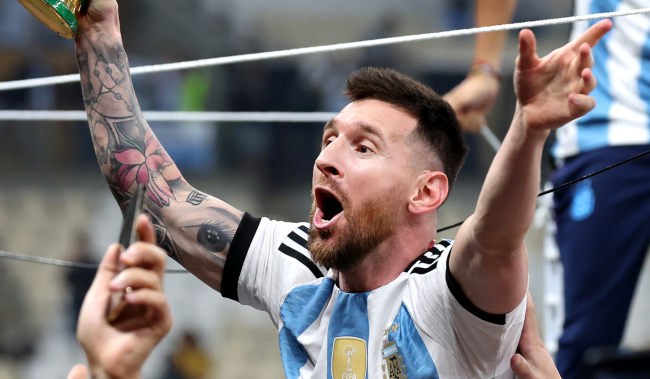 Following Argentina’s incredibly dramatic victory in the World Cup over France this past weekend, there were two things on the minds of most sports fans who watched the extra time thriller.

One, is Lionel Messi the GOAT of all GOATS? And two, who was the female Argentina fan who took off her shirt and went topless in the front row at Lusail Stadium?

I hope she makes it out of Qatar before she gets arrested. 😬🇦🇷

As we discovered on Monday, multiple photos captured not just the one female fan, but two women not wearing their shirts after Gonzalo Montiel scored the winning penalty kick in the World Cup final on Sunday.

Late Monday night, their identities were uncovered by Joe Kinsey over at Outkick.

Their names are Noe and Milubarbiie.

Noe was the one caught on TV that generated the big stir on social media.

Argentina won, yes. But did anyone else see the topless woman totally going crazy in the front row, waving her shirt in the air? Have yourself a day, girl.

“And this flag is dedicated to you my friends, family and all the people of Quilmes and the south area who always support me with messages and words so nice to express their pride and good wishes that I know you do it from the heart! My whole life is in QUILMES… Proud to have been born in the beer city… From Ezpeleta-Quilmes to the world,” Noe wrote on Instagram prior to the match.

Both women, it was discovered by eagle-eyed internet sleuths, actually had body paint in the shape of Argentina’s flag covering a good portion of their breasts.

Despite not being completely nude from the waist up, there was still much concern online over the women possibly getting arrested in Qatar.

Qatar had stated in the leadup to the World Cup that “visitors are expected to show respect for local culture by avoiding excessively revealing clothing in public,” adding that “it is generally recommended for men and women to ensure their shoulders and knees are covered.”

The good news is, according to Outkick, that despite their display inside (and later again outside) the stadium, both ladies appear to have gotten away without being incarcerated.

Hopefully, both popular female Argentina fans were able to continue on to their hotels and eventually get on their flights back home without incident.

UPDATE: Both ladies posted videos on Tuesday showing that they made it home okay.