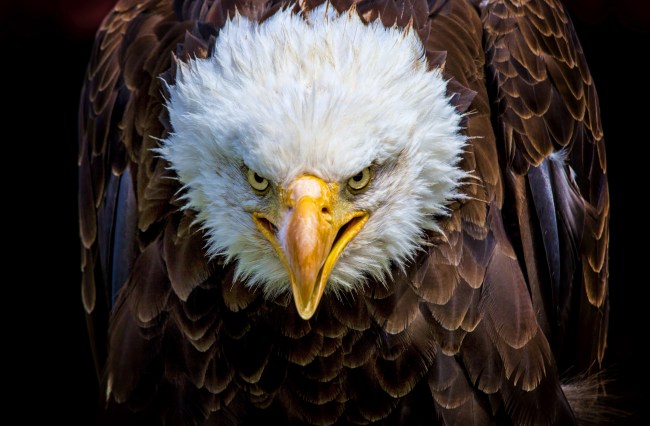 A close encounter with a Bald Eagle is a rare experience and one that most Americans would relish in delight. Angler Kevin Labrosse was fishing for walleye Lake Temiskaming in northern Ontario with his girlfriend when they got the camera rolling.

These incredible raptors have razor-sharp talons and huge beaks. They’re the cock of the walk in the wild. And this pair got up and close with one in a hurry.

According to FTW, the pair first spotted the Bald Eagle when Kevin Labrosse was removing the jig from the mouth of a walleye (fish) he’d just caught. He says that’s when “the eagle came swooping over my head to take the fish, and I never saw it coming. My girlfriend yelled out and I looked up after hearing the loud wings flapping. Scared the crap out of me.”

His girlfriend, Claudie Morin, popped out the smartphone camera and they had the idea to present the fish to this Bald Eagle in an attempt to see if the bird would swoop down and grab it. Initially, the girlfriend was waving the fish around in the air to see if the Bald Eagle would come back around. It did. And she panicked and dropped the Walleye in the boat.

That’s when Labrosse put the fish on his paddle and held it out for the eagle who took the bait and they capture this awesome moment on camera:

They pulled this off not just once but TWICE. The eagle came back for another easy meal (via FTW):

“The eagle came around us and swooped down from behind us and took it,” Labrosse said. “It was the most exhilarating feeling in my life. It then took the fish to a nearby tree and ate it.”

With another fish about the same size, Labrosse did it again and the grateful bald eagle scooped it up off the paddle again.

“This time it came at us straightforward, and that’s where we got the epic shot,” Labrosse said. “Amazing feeling. Exhilarating, yet scary at the same time. Nothing like it.”

It’s getting colder in the North Country and the days are getting shorter. It’s never smart to feed wild animals. You don’t want them accustomed to accepting an easy meal because only the strong survive. But this animal saw the chance for some easy fish, took it, and those extra calories could go a long way in helping this incredible bird as the season’s change.

For more on this story, you can click here to visit For The Win.