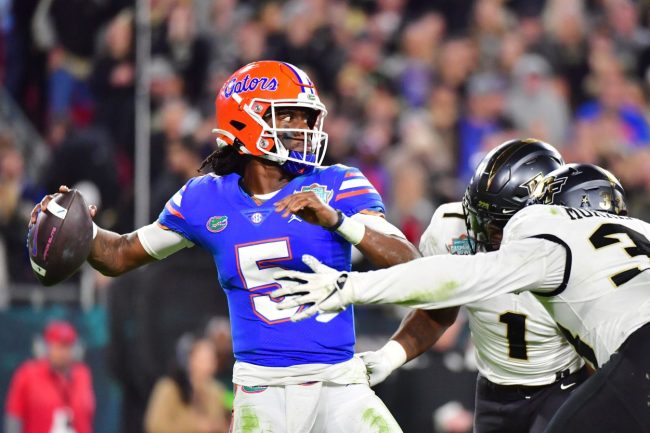 Florida quarterback Emory Jones was expected to enter the transfer portal after the conclusion of the 2021 season. All signs pointed toward him leaving the Gators and playing elsewhere in 2022.

However, per a recent report, that does not appear to be the case.

Jones, a junior, split time with true freshman Anthony Richardson during the fall. He did not play particularly well throughout the year, but also did not look terrible and almost led the Gators to an upset of the Crimson Tide.

Regardless of his performance, Jones was fully considered to be entering the transfer portal. Despite the seemingly inevitable decision, he chose to play for Florida in the Gasparilla Bowl against UCF and started in the game.

In some ways, it was an audition. He had a chance to show his stuff for any potential suitors.

Among the teams that were reportedly interested in Jones, was UCF. So he was playing a game against a team that he might have played for in 2022.

Since then, Jones has not entered the transfer portal. In fact, per a report, he has enrolled in classes for the spring at Florida and remains with the team.

Had been expected to enter the transfer portal but hasn’t officially done so at this point and, per sources, is still with the team at Florida. Is enrolled in classes and took part in a team meeting yesterday.https://t.co/dVpPTB07U9

This could mean a few things:

It is all speculation, but it certainly seems like the third option is very much on the table. Jones’ Gasparilla Bowl game performance was so terrible that nobody wants him. Yikes.