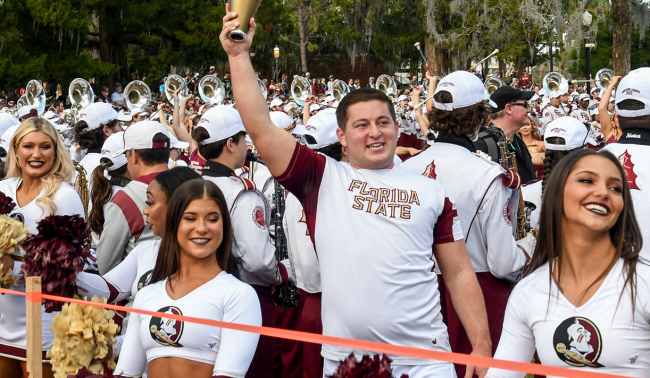 Florida State football, after a very rough six year patch, appears to finally be back. A 10-3 season (5-3 in the ACC), culminating with a win at the Cheez-It Bowl, has Seminoles fans feeling a lot better about the football program under head coach Mike Norvell.

Unfortunately, all of those good feelings just got shot in the arse with a cringe-inducing, what in the actual hell is going on here video that the Florida State cheerleaders recently released online.

For those that are unfamiliar, the young man who appears in the video is named Madden San Miguel from Dallas. He goes by the nickname “Baby Gronk” and calls himself a “FOOTBALL CELEBRITY” on social media.

And he’s not wrong… he is kind of a football celebrity.

#FSUTwitter Tonight at 7:30pm EST we have @BabyGronk5 on to get to know the real BABY GRONK and to hear how his Dad and him have made over 50K in NIL and built over 250k followers on IG watch here at 7:30pm https://t.co/QQA3fVFDOV pic.twitter.com/aZGbrti1pI

WOULD HE GET THE FOOTBALL SCHOLARSHIP BASED ON THIS FILM
CLASS OF 2031 pic.twitter.com/BHZMXHIqjr

Last year, he was even featured in a profile by Bay News 9 in Tampa when he came to town to play for an 8-U National Flag Football Championship.

What he build was an Internet Superstar, people couldn’t get enough of the kid known as Baby Gronk who would tower over kids his age and go out and dominate them on the football field.

Jake says a lot of people may think that he is living thru Madden, but what he is trying to do is give his son a better life.

While he was there he got to meet several of the Florida State cheerleaders, who then proceeded to make that aforementioned WTFlorida video.

College football fans didn’t really know how to react to… that.

Other responses included “holy cringe,” “Wtf is this crap,” “This is weird,” “excruciating watch,” and “As if I didn’t already need a reason to hate FSU.”

I gotta stop just watching everything I see on my feed.